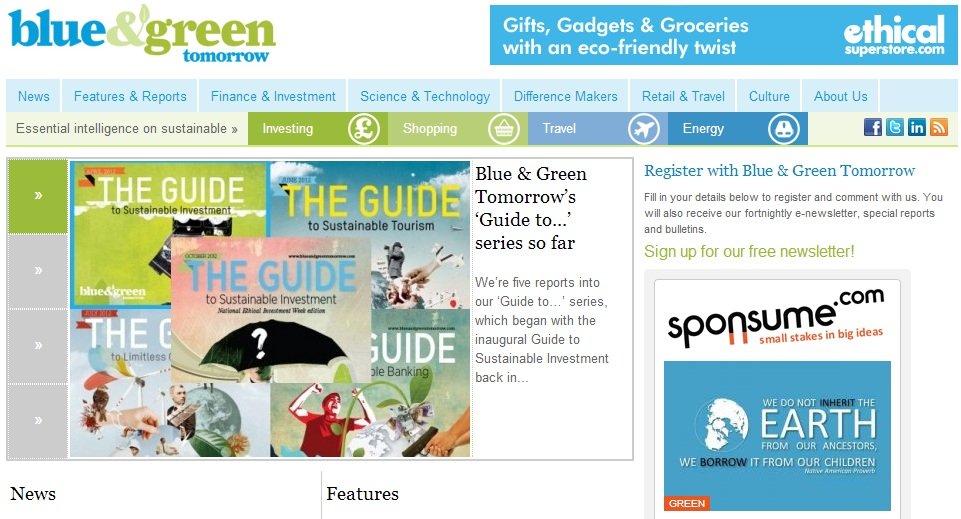 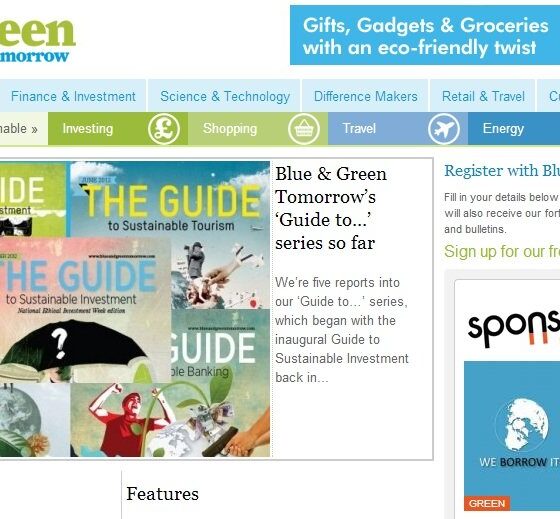 Two years ago today, we launched. Help us fund two more reports in 2012

Blue & Green Tomorrow was two years in the making and today we’re two years old. The simple idea was to write about the connection between investment and the world we live in – without jargon. With our crowdfunding campaign ending at midnight tonight, Simon Leadbetter looks back at the four-year ebb and flow of a fledgling publication.

The idea behind B&GT is a very simple one. Take the sixteen years’ experience I had at the time working in financial services and media, and then combine them with personal values around corporate ethics, environmental and social responsibility and wider thinking of sustainability.

The connection between what we investment in and the world we inhabit seems obvious to many, but there seemed to be very few people out there actively explaining it to the unconvinced

It was only while I was in unspoilt New Zealand in early 2010 that the idea coalesced into the magazine concept that was ultimately launched. ‘They’ told me that launching a new magazine was brave. ‘They’ told me told that I was daft.

‘They’ were mostly right. But this is a story of throwing yourself off the cliff and building the plane on the way down kind of entrepreneurship to quote Reid Hoffman. Here goes.

My view was that anyone with a laptop can launch a blog or website, in a ‘build it and they will come’ mentality. By publishing a hard copy magazine, we were creating a physical artefact that opened doors and actually landed with a thump. Something tangible often confers a certain credibility – especially in journalism. The printed word still matters.

In addition, preaching to the converted has never been the aim of the game. Encouraging people who already live sustainably to live sustainably is, in a word, pointless. A website with the terms and language we used would mainly attract the already convinced – who would obviously nod sagely at our wise insight as they already agree with us and us with them. A print magazine could be sent to the unconvinced, effectively as a free gift, and perhaps open a dialogue with the lightly sceptical.

We launched on November 5, during National Ethical Investment Week 2010. In the lead up to the launch, I had published The Rise of Responsible Investor and was introduced to the overly acronym-laden but ultimately inspiring world of UKSIF, EIA and EIRIS – all of whom were very encouraging and supportive of what I was trying to do.

I had settled on four core areas for editorial, as they balanced the drier topics of investment and energy with the more fashionable world of travel and shopping. During my time in financial services, I have bored myself rigid patiently trying to explain to enthusiastic marketers how excruciatingly mind-numbingly dull and incomprehensible most normal people find financial services.

The original content was very good, but the cost and herculean effort of producing a monthly print magazine nearly killed me and it didn’t reach the number of people with the frequency we needed. The launch team of David Tebbutt, Dominic Kershaw and Lori Heaford soldiered on for five issues before I finally pulled the plug and went back to the drawing board for a rethink.

Despite the support of several ethical financial advisers listed here, Good Energy, Ethical Superstore and Original Travel, this version of B&GT wasn’t going to be the one that made it.

April 2011 saw the last version of the print edition. It had burnt through my financial reserves at an impressive rate and distracted from the digital version we desperately need to invest in and build.

That said, we had managed to build a better holding website and it was clear that the internet was our future. We could still reach the unconvinced through social media, paid search and the judicious use of opt-in email. Around 750,000 people currently invest in socially responsible investment funds and there are 1.7 million searches per year for ethical, sustainable, green, responsible, socially responsible and impact investing. The problem isn’t one of demand; but supply and information.

In the UK, we have a huge problem with apparent business failure, whereas in the more entrepreneurial US, it’s seen as a necessary rite of passage for any budding entrepreneur. If you haven’t had a business failure in your background, you’re not an investment-worthy candidate.

But I live in the UK and I know this particular psychology well having worked for two companies that tracked fast-growth, innovative companies. The army of ‘told-you-sos’ is always ready and waiting with baited breath to unleash their stream of knowing remarks. I had one phenomenally successful business and one creative success but commercial miss. B&GT looked like falling into the latter camp.

Early supporters understandably started to drift away, despite my declared intent to relaunch in the autumn. Many gave messages of support and hoped we would be back.

So, we sold up in London, identified a university town with a rising school of journalism and set about rebuilding the business. We took on three interns and a few designers, and redeveloped our website. With me acting as editor-in-chief, traffic rose, feedback became more positive and we started selling again.

And then an investor came calling.

No, not a comment on the current economic crisis in the country but a reference to the Trojan horse that led to the sack of Troy. My potential backer promised funds and the platform to grow B&GT to new heights, in addition to creating an exciting new way to fund renewable energy projects.

He nearly ruined us.

Over four months we were led a merry dance. Formal documents of intent started to circulate and with a six-figure prize of investment within my grasp, I geared up to deliver what had been agreed. A new editor was recruited, along with a sales manager and more interns, and the burn rate rose again.

The team was humming. Weekly debates on major topics gave everyone the brain food to write better articles, and our content and look got better.

We published the first of our serious guides and the future looked bright.

But pride comes before a fall and I was too hasty it seems. Our potential backer then vanished. Literally. No emails, no phone calls, nothing. The deafening sound of silence.

“To lose one editor is unfortunate, to lose two, careless”

Wasting money is tough but unravelling this fledgling team was the hardest thing.

Walking into the office one day, someone had written on the whiteboard, “This is so sad”. People rapidly left and we went back to the core team of a writer and me, with volunteers ably supporting.

That one writer, our editor Alex Blackburne (a hero amongst men), and I then did something rather special. With nothing and no-one around, we retrenched and launched our three best reports so far, on energy, banking and investment.

We’re preparing two more on shopping and the media before Christmas. Our traffic is higher than it’s ever been and people are subscribing to our newsletter at a rate of knots.

B&GT will be here in 2013, to see our fourth National Ethical Investment Week. If you can help us get two more reports out in 2012 at http://www.sponsume.com/project/blue-green-tomorrow we will be in a good position for the New Year.

One quote that has resonated over the years, and applies to all of those who sail the entrepreneurial seas, has been Teddy Roosevelt’s 1910 speech at the Sorbonne in Paris, “It is not the critic who counts: not the man who points out how the strong man stumbles or where the doer of deeds could have done better. The credit belongs to the man who is actually in the arena, whose face is marred by dust and sweat and blood, who strives valiantly, who errs and comes up short again and again, because there is no effort without error or shortcoming, but who knows the great enthusiasms, the great devotions, who spends himself for a worthy cause; who, at the best, knows, in the end, the triumph of high achievement, and who, at the worst, if he fails, at least he fails while daring greatly, so that his place shall never be with those cold and timid souls who knew neither victory nor defeat.”

Blue & Green Tomorrow is one such a worthy cause and your support is more appreciated than you will ever know.

Please help us at http://www.sponsume.com/project/blue-green-tomorrow