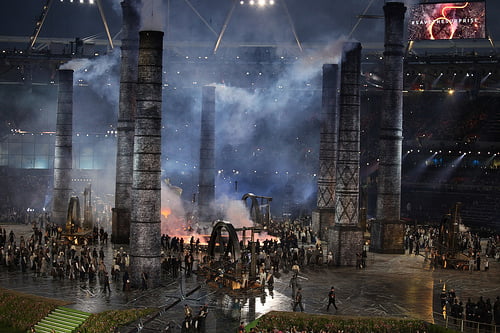 If large corporations aren’t screwing the environment through pollution and waste, they’re screwing society by dodging tax and sacking people or wrecking the free market economy by acting as cartels. Often they’re doing all three. Not all large corporations do this, but most of them do.

Big has often been seen as good.

In almost every sector from finance, utilities, retail, transport, media to leisure, privatisation or demutualisation and then consolidation has been promoted as the way to create world-beating industries. Sadly, it has created environment, society and economy-crashing behemoths, or world-wrecking industries, that flout necessary regulations and safeguards, ignore democratically elected politicians and treat their customers like cattle.

Large industrial corporations will spend millions to preserve the status quo, strangle innovation and squeeze every last drop of profit from a market.

This is the antithesis of capitalism.

In an excellent blog by the marketer’s marketer, Seth Godin eloquently set out this difference between industrialists and capitalists: “Industrialists seek stability instead. Industrialists work to take working systems and polish them, insulate them from risk, maximise productivity and extract the maximum amount of profit. Much of society’s wealth is due to the relentless march of productivity created by single-minded industrialists, particularly those that turned nascent industries (as Henry Ford did with cars) into efficient engines of profit.”

As we learnt in Autumn 2008, many financial players proved far too big to fail and had to be bailed out by taxpayers which, according to Maurice Glassman, “was the biggest transfer of wealth from poor to rich since the Norman conquest.” That is not the role private enterprise plays in the economy.

Failure and losses should not be nationalised, if successes and profits are privately hoarded.

Godin goes on to point out that industrialists like regulations only if they write them, are rewarded by stock markets that celebrate ruthless efficiency over messy innovation and really hate competition, change, creativity and, most of all, people. As he puts it, people are “inconsistent and interested in things other than the last zero. The best employee is a robot that can be plugged into a wall.” That is not a recipe for optimal employment.

So where does our nation’s wealth and growth really come from? And where will it come from in the future?

Small and medium sized businesses provide nearly 60% of our jobs and 50% of GDP (BIS, 2010). Between 1995-99 new businesses were found to be the greatest single source of new jobs, accounting for 2.3m extra jobs, of which 85% were in small businesses.

As we wrote on Thursday: “Food, energy, housing and water, plus an ageing population, will be placing severe strains on the economy and environment within and across borders. Civil society will be under similar pressure if voting turnout continues to plummet, the gap between rich and poor continues to grow and the cost of everything begins to rise as we reach the limits of growth.”

Each of these areas needs significant innovation and the UK is truly exceptional at innovation. We are ranked 5th, above every other G8 member, in the Global Innovation Index 2012, published by INSEAD and the World Intellectual Property Organisation (WIPO).

The agricultural, industrial and information revolutions have all, in part, been led by British inventors and innovators – as demonstrated by the incredible opening ceremony that kicked off last summer’s Olympic Games in London. It is time we used our natural curiosity creativity and genius to take our role as leaders of the sustainable revolution. Turning in on ourselves and clutching at past glories as though it was ever better than now is a fool’s errand.

Our research universities and technical universities, applied science and creative industries are all world class and we could harness these strengths to build the world-beating industries our future economy needs.

The Confederation of British Industry reported in 2012 that the green economy provided one-third of growth in 2010 and was then worth 8% of our GDP.

Old, dominant and stagnant industries stifle growth and innovation – with the odd notable exception. The many problems we face as a country and world can be solved through British innovation and creativity. This requires vision, leadership and determination – something sorely lacking in our current government, in which one of its leading figures described the environmental and renewable energy sectors as an “environmental Taliban“.

Britain’s future lies not in wrapping ourselves in the flag, retreating from the future and backing ageing, dirty and shrinking industries, but instead striding out with confidence and innovation.