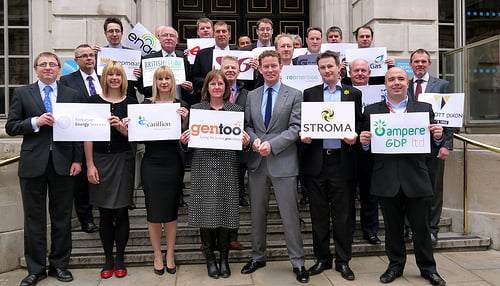 The green deal idea is simple; homeowners and businesses should employ green technology into properties with no upfront costs.

Yesterday, the government set out secondary legislation that will give the scheme the green light in bringing lasting energy efficiency into operation, but some remain critical of the success of the project.

Many British homes are fetching energy efficiency levels way below what they should be. The green deal positions itself as an innovative solution, cutting carbon emissions, and mounting energy bills by making 14m houses warmer and less expensive to heat.

But, the coalition’s own flagship strategy may well be floundering after revelations from its own final impact assessment, which discovered that the number of lofts being insulated per year will plummet by 83%. The deal remains at the heart of the government’s ambitions to be the “greenest ever”.

On Monday, energy secretary Ed Davey announced the government response to the green deal and ECO (Energy Company Obligation) ahead of its introduction, expected this Autumn.

“It is important that the market will be able to test systems properly during the first weeks following the introduction of the green deal framework and ahead of the first fully completed green deal plans in early 2013”, said Davey.

“The ECO legislation I have put before Parliament today will ensure that a new ECO is established from October this year.

“This will mean that an estimated £1.3 billion worth per year of energy efficiency and heating measures can be delivered across Great Britain.

“This will be directed to vulnerable and lower-income households, and carbon saving measures. The government remains absolutely committed to tackling fuel poverty.”

Davey’s statements prompted criticism that initial take-up of green deal loans would be low. The updated impact assessment however stands as a disappointing blow to the rate of insulation projects. The assessment predicts that the number of loft insulations will fall from about 900,000 in 2012 to 150,000 in 2013.

Together, the predictions fall staggeringly short of advised figures provided by the committee on climate change, in light of the UK’s climate change targets. Department of Energy and Climate Change (DECC) statistics show that 43% of lofts remain inadequately insulated, while 42% don’t have any at all.

DECC believes that the green deal has the potential to support 60,000 jobs in the insulation sector alone. But mounting pressures for the government to provide helpful incentives means that £200m funds and proposals to change building regulations teeter on the edge of disappointment.

The Confederation of British Industry’s (CBI) Ryan Kelly said, “Having more detail on how the green deal will operate on a practical level is an important step for a scheme that has the very real potential to cut costs for consumers and businesses in the long run, and help generate business investment and jobs.

“However, there is still plenty of work to do. With the launch of the green deal expected towards the end of the year, the government needs to move quickly to put everything in place. It must ensure that businesses who want to get involved are in the best position to do so and put the right policies in place to stimulate consumer demand.”

Grant Thornton’s head of energy, environment and sustainability, Nathan Goode, relayed messages of the government’s role in financial and carbon saving initiatives: “Anyone expecting a radical change of speed or direction from the government will have been disappointed by its response to the consultation yesterday.

“The government, seeking to balance consumer protection with reducing industry burdens, understands that too much baggage will hold it back. So the warranty proposals are designed to align with what is deliverable, while the assessor proposals stop short of insisting on full independence.

“The bit that’s missing is the real rocket fuel – the finance for householders. Virtually nothing is said about the Green Deal Finance Company, other than a general statement alongside other possible options in the framework document, while an answer on the disbursement of the early adopter money is postponed until later in the year.”

The government’s own impact assessment for the green deal casts a dark shadow over the scheme’s possible success. But there are other ways in which you can become more energy efficient at home: like switching to renewable energy for example. Get in touch with Good Energy to find out how.

Government’s own figures show that green deal could fail