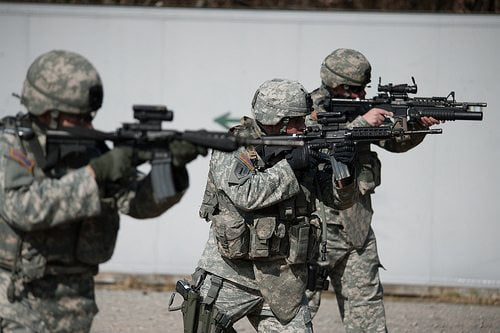 The Church of England has been criticised for owning £10m of shares in one of the world’s biggest arms manufacturers, which opponents say clash completely with its ethical investment policy.

As anti-war protesters prepare to flock to the Defence & Security Equipment International (DSEI) arms fair in London on Monday, the church finds itself in the middle of a controversy over a £10m investment in General Electric (GE).

The church claims that only 3% of the company’s business involves trading arms. In fact, the firm provides several products – many of which are for domestic and civil use. However, it also develops aviation services and “integrated systems and technologies for combat aircraft, military transport, helicopters, land vehicles and unmanned aerial vehicles (UAVs)”, also known as drones.

GE also produces military aircraft engines, such as the F101, which were used in the Afghanistan and Iraq wars.

The news has sparked disappointment among priests, charities and Christian groups. The Campaign Against Arms Trade told the Independent, “If the Church is committed to following an ethical investment policy, it should drop the GE shares from its portfolio and invest it in companies producing more ethical and beneficial products, including renewable energy technologies.”

According to the Church of England’s Ethical Investment Advisory Group (EIAG), the body has a clear policy on what is consider unethical investment – and therefore is avoided by the church.

However, the church has a 10% investment threshold for weapons firms. Speaking to Blue & Green Tomorrow in July, EIAG secretary Edward Mason said that it has “zero tolerance for indiscriminate weaponry”.

The arms’ investment is the latest controversy that hit the church, after its indirect investment in payday lender Wonga was disclosed by the Financial Times in July.

The Comic Relief charity has also been the subject of scrutiny, after the Sunday People revealed it invested in tobacco and arms firms.