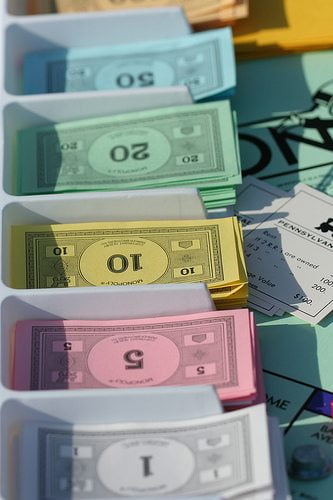 Publishing its provisional findings as part of an in-depth investigation into the £16 billion current account and business banking sectors, the Competition and Markets Authority (CMA) has found that banks do not have to work hard enough to compete for customers.

In 2016, Blue & Green will be publishing our Guide to Sustainable Banking. We are calling for submissions. Please email the editor if you would like to be included.

Emma Dunkley reports in the FT, that the CMA believes: “banks do not have to work hard enough to compete for customers” in the £16bn current account market, as the review rejects calls for current account break-up.

Fionn Travers-Smith, Campaign Manager of Move Your Money, said: “Greater transparency in the banking sector is always welcome, but refusing to consider breaking up Britain’s massive mega-banks misses an open goal for affecting real competition in the sector, and leaves Britain vulnerable to future crises. The UK is alone in relying almost solely on five universal banks to support our economy, and low levels of switching reflect the fact that these major banks are all structurally the same and so all act the same.

“Breaking these up into different types of banks, including into ones that offer greater support to stakeholders, would more greatly affect competition in the banking sector because these banks would be genuinely different. Instead, enhancing greater switching between the current players, whilst welcome, is promoting more of the same and expecting different results.”

Hannah Maundrell, Editor in Chief money.co.uk comments: “Our research has shown that the real catalyst to get consumers moving is a guaranteed instant switch which would drive four out of ten consumers to make the move in the next year. This, alongside being able to take their account number with them, and pre-application approvals are what will encourage more people to make the move. Switching current account is well worth doing, and with banks and building societies giving away free cash and savings beating returns, it could be the easiest £150 you earn this month.”

1. Of those that haven’t switched, almost one in ten (8%) feel there is no benefit as all current accounts are the same
2. Almost 2 million don’t trust banks to switch for them and a further 4% still feel it takes too long
3. Almost half (41%) of those that haven’t switched said they would be more likely to make the move in the next year if the process was instant or for one in three (30%), if they could take their account number with them ​

The investigation has identified a number of competition problems in both the personal current account (PCA) and small and medium-sized enterprise (SME) banking markets. Low levels of customer switching mean that banks are not put under enough competitive pressure, and new products and new banks do not attract customers quickly enough. There is a particular problem in SME banking where many SMEs open their business current accounts (BCA) at the same bank where they have their PCA, then stick with that bank for their business loans.

57% of consumers have been with their PCA provider for more than 10 years, and 37% for more than 20 years. Customers with current accounts are faced with complex overdraft charges and limited information on product and service quality, which, along with limited effective comparison tools, makes it very difficult for customers to know what they are paying and to compare banks and products.

Bank customers fear that switching their current account to a new bank will be complicated, time-consuming and risky. The Current Account Switch Service (CASS) was set up to make the process easier and is functioning reasonably well, but awareness and confidence remain low. Only 3% of customers switched their PCA in 2014 and just 16% looked at alternative accounts.

The CMA found that overdraft users are even less likely to switch PCAs than other users. Heavy overdraft users, in particular, could save up to £260 a year if they switched. On average, current account users could save £70 a year by switching.

The investigation also discovered that accounts which are more expensive and below average quality are not losing customers to cheaper and better alternatives at the rate that would be expected in a well-functioning market.

The lack of competitive pressure in SME banking is highlighted by the fact that more than 50% of start-ups looking for a SME account choose the bank with which they have a personal current account, over 90% stay with their BCA when the initial free banking period comes to an end, and around 90% then go to their BCA provider when they are looking for business loans.

As in the case of PCAs, the opening and/or switching process is seen to be time-consuming, and at risk of things going wrong. SME charging structures are complex and difficult to compare, there are no service quality measures to aid comparison and there are limited effective price comparison tools for SMEs.

The CMA investigation did find a number of positive developments: new entrants into both PCA and SME banking, innovative products becoming available, the digital innovations associated with online and mobile banking, and new tools like Midata and CASS, which have the potential to increase searching and switching.

Despite these encouraging developments, because too few customers are switching, banks do not have strong enough incentives to work hard to compete for customers through better products or cheaper prices, and smaller or better banks find it hard to gain a foothold.

The CMA has published an initial list of remedies, which sets out possible measures aimed at addressing these issues by increasing competition and securing a better deal for customers. It will develop these proposals over the coming months. It is important that any new remedies are really effective, so the CMA will be testing its proposals carefully.

– Requiring banks to prompt customers to review the service they receive from their bank through receiving individual messages at certain ‘trigger points’. These trigger points could include a loss of service, closure of their local branch, unarranged overdraft charges or a change in the terms and conditions of their account. In the case of SMEs a key trigger point could come at the end of free banking periods.

– Making it easier for consumers and businesses to compare bank products by upgrading Midata, an industry online tool, launched with the support of government, that gives consumers access to their banking history at the touch of a button. Midata allows consumers to easily access their banking data from their bank and input it directly into a price comparison website which can then analyse their transactions, and alert them to available bank accounts which best suit their needs. An improved Midata could have a radical impact on consumer choice in retail banking markets.

– Requiring the creation of a new price comparison website for SMEs – currently nothing effective exists to fulfil this role.

– Requiring banks to help raise public awareness of, and confidence in, switching bank accounts, through increasing their funding for a widespread and sustained advertising campaign promoting CASS and improving the service it offers.

– Requiring better sharing of information with credit reference agencies, banks and financial advisers – making it easier for SMEs to shop around for loans and cutting out the need for multiple application form filling.

The CMA provisionally decided not to recommend remedies aimed at ending free if-in-credit (FIIC) accounts as it saw no convincing evidence that the prevalence of the FIIC model distorted competition, noted that some banks have already devised accounts which compete with FIIC through the rewards they offer, and also noted that FIIC accounts give a reasonable deal to many customers.

Structural remedies, such as forcing the break-up of banks, were also provisionally rejected as it was decided that they were not likely to be effective in addressing the competition concerns found. The problems in the market are unlikely to be resolved by creating more, smaller banks; it is the underlying issue of lack of switching which has to be addressed.

Alasdair Smith, Chairman of the retail banking investigation, said: “Banking is a sector of huge importance that affects every household and business in the country.

“We think customers need to be put in charge of their banking.

“There have been long-standing concerns about the retail banking market, where many customers could save money and get better services by switching accounts. This investigation was an opportunity to take a detailed and independent look at the sector.

“Despite some encouraging developments, particularly in the shape of challengers that have entered the market in recent years, for too long banks have been able to sit back and take their existing customers for granted.

“We don’t think that customers will truly benefit from a more competitive marketplace until they can compare accounts more easily and feel confident that they can switch without risk, and that is why our provisional remedies are aimed at giving customers control.

“We are considering a series of measures that will have a far-reaching impact on how banks operate and will empower account-holders to search for and switch to the account that suits them.

The full provisional findings report along with over 30 appendices will be published later next week. The CMA will now consult and hold detailed discussions with all interested parties on the findings and possible remedies ahead of publishing its final report in May 2016. The CMA is also reviewing measures put in place by its predecessor body, the Competition Commission, in 2002 and 2008, to remedy concerns in the SME banking and Northern Ireland personal current account sectors.