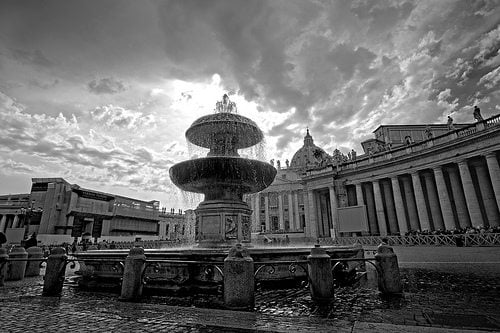 Vatican Bank director Paolo Cipriani and his deputy Massimo Tulli resigned from their posts on Monday after three people, including a priest, were arrested in June amid claims of corruption. It is the latest of a series of scandals involving one of the world’s most secretive banks.

Many said that Pope Francis would bring some fresh thinking to the Catholic world when he was elected in March. He stressed the importance of tackling paedophilia, denounced corruption within religious groups and spoke about the need for world leaders to bring an end to what he called the “cult of money”.

“A rich church is an old church without life. St Peter did not have a bank account”, he said.

This is arguably the reason why he decided to eradicate the ‘dark side’ of the Institute for the Works of Religion (Istituto per le Opere di Religione) – better known as IOR or simply the Vatican Bank, which has the aim “to provide for the safekeeping and administration of movable and immovable property transferred or entrusted to it by physical or juridical persons and intended for works of religion or charity”.

This institution has been involved in several financial scandals. The most famous dates back to 1982, when the Banco Ambrosiano, protected by the Masonic lodge P2, experienced a financial breakdown. The IOR was its main shareholder.

In 1993, the Vatican Bank was embroiled in the nationwide ‘mani pulite’ (Italian for “clean hands”) investigation (also called ‘Bribesville’), when 108 million Italian lira were transferred illegally to the IOR. The most recent scandal came in 2010, when suspicious money transfers between the IOR and other banks ended up with the claim that the Vatican institution was violating anti-money laundering legislation.

Although Pope Benedict XVI said that the IOR would have conformed to the existing anti-money laundering norms, it has no obligation of doing so, because it is in fact an extra-communitarian state with different financial regulations, according to the Bank of Italy.

Indeed, in 2012, leaked documents from the Vatican (‘Vatileaks’) revealed that there are still irregular activities going on in the bank, despite the fact that director Paolo Cipriani said that all operations were traceable.

Pope Francis decided to create a special committee to watch over the Vatican Bank, but before he could do that, three people were arrested at the end of June for fraud, slander and corruption. One of them, Monsignor Nunzio Scarano, is accused of corruption in relation to an attempt to smuggle money from Switzerland. He was also under investigation for the suspected laundering of €560,000.

The decision by Cipriani and his deputy Massimo Tulli to resign from the Vatican Bank was unexpected, because although the two were being questioned about the 2010 scandal, the Pope did not ask them to leave. The interim director is the president of the IOR, Ernst von Freyberg.

Pope Francis claimed he wanted to move the Vatican Bank onto a new moral path and he now has the chance to do so.

However, history shows that good intentions are often not enough in the Holy See, a place where, as the Pope himself said, corruption, lobbying and power plays are just behind the chapel door.