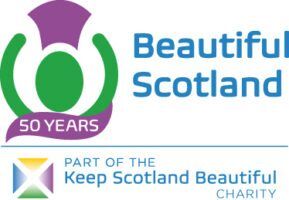 The ceremony, hosted by Aberdeen City Council, recognised the hard work of communities the length and breadth of Scotland to clean up, green up and beautify the places that matter to them.

The event, which brought almost 300 delegates from across Scotland together in the city to receive their awards, saw George Anderson of the BBC’s Beechgrove Garden present almost 50 accolades – recognising the significant number of entrants into the gold anniversary competition. Images of the awards can be accessed here.

The highlight of the event was the presentation of the prestigious 2016 Beautiful Scotland Rosebowl. The Award was presented to North Berwick in Bloom for receiving the highest overall marks out of all 2016 entrants, for the third time. North Berwick in Bloom was commended for its consistently excellent initiatives which saw the group take steps towards being more environmentally friendly, actively involve the wider community and work with the business community. As a result there is widespread recognition locally of the benefits that the group brings to the local area and the economy.

The awards attracted six new entries in 2016, including four from Fife – bringing the region’s total up to 13 – the highest in Scotland. Entry numbers for both Aberdeen and Perth and Kinross also increased this year, with both regions attracting six entrants each.

“I would like to congratulate all of the Beautiful Scotland 2016 award winners. Quality local environments are vital to vibrant communities and good for business – helping to nurture respect for local places and improve wellbeing.

“All our Beautiful Scotland entrants have committed a lot of their own time and energy to make sure that Scotland’s outdoor spaces are kept clean, green and beautiful. The Beautiful Scotland awards ceremony provides the opportunity to showcase the role that they have played in making a difference. It is vital that we reward their efforts and celebrate their achievements.”

Twelve category winners, with additional Discretionary Awards and the overall Rosebowl, were presented at the ceremony. All entries were assessed against the three core pillars of the Beautiful Scotland campaign – Horticultural Achievement; Environmental Responsibility and Community Participation.

Beautiful Scotland is managed by Keep Scotland Beautiful, a member of the RHS Bloom Federation. Entrants are judged by a team of expert volunteer judges on their year-round achievements. Awards are presented to a range of local authorities and communities who have achieved the highest scores in their categories, with Discretionary Awards given to those who demonstrate excellence in their commitment to the campaign. Some of the winners will go on to represent Scotland in UK RHS Britain in Bloom in 2017.

The Aberdeen awards ceremony was supported by Aberdeen Inspired and sponsored by Balmoral Group Holdings Ltd and Amberol Ltd. Further information can be found at: www.keepscotlandbeautiful.org/beautifulscotland