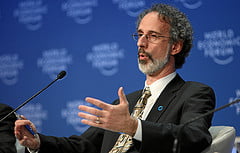 Peter Gleick, a US climate and water scientist, says he “deeply regrets” leaking confidential documents belonging to the Heartland Institute, who have said that a “mere apology is not enough”.

The documents, which appear to name the think-tank’s more controversial and high-profile backers, were initially obtained last week by DeSmogBlog and published on its site.

Peter Gleick, a US climate and water scientist, says he “deeply regrets” leaking confidential documents belonging to the Heartland Institute, who have said that a “mere apology is not enough”.

The documents, which appear to name the think-tank’s more controversial and high-profile backers, were initially obtained last week by DeSmogBlog and published on its site.

In response, the Heartland Institute said, “Some of [the] documents were stolen from Heartland, at least one is a fake, and some may have been altered.”

But, just days after the initial leak, hydroclimatologist Peter Gleick has pulled back his cloak to reveal himself as the mystery source of the documents, in a blog for the Huffington Post.

“My judgment was blinded by my frustration with the on-going efforts – often anonymous, well-funded, and coordinated – to attack climate science and scientists and prevent this debate, and by the lack of transparency of the organizations involved”, Gleick wrote.

“Nevertheless I deeply regret my own actions in this case. I offer my personal apologies to all those affected.”

He explained that after anonymously receiving the think-tanks climate strategy through the post, he attempted to check the authenticity of the document.

“In a serious lapse of my own professional judgment and ethics, I solicited and received additional materials directly from the Heartland Institute under someone else’s name”, he explained.

“The materials the Heartland Institute sent to me confirmed many of the facts in the original document, including especially their 2012 fundraising strategy and budget.”

With the initial document verified as genuine, as well as several new pieces of material at his disposal, Gleick anonymously sent what he had to several climate experts and journalists. And DeSmogBlog was the first of the bunch to publish the controversial papers.

The think-tank maintained its stance that at least one of the documents was a fake – the Confidential Memo: 2012 Heartland Climate Strategy, which seemingly reveals the relationship between Heartland and the Charles G. Koch Foundation.

The “forged” paper, alleged by Heartland to have been added to the official documents by Gleick, “has been extensively cited by newspapers and in news releases and articles posted on websites and blogs around the world”, Bast said.

“It has caused major and permanent damage to the reputations of the Heartland Institute and many of the scientists, policy experts, and organizations we work with.”

The think-tank is in the process of consulting legal avenues to go down to determine its next steps.

Regardless of Gleick’s unethical behaviour, the revelation still reveals huge cracks in the widespread recognition of climate change.

Blue & Green Tomorrow acknowledges and accepts anthropogenic global warming, and we are not alone.

We are also of the firm belief that humans, though causing climate change, can also be the solution – namely, through the investment choices we make and the lives we live.

We strive for the elevation of sustainable, responsible, ethical, and green investment to the mainstream agenda. If you’re interested in changing how you invest, get in touch with your IFA or fill in our online form, and we’ll connect you with a specialist ethical adviser.