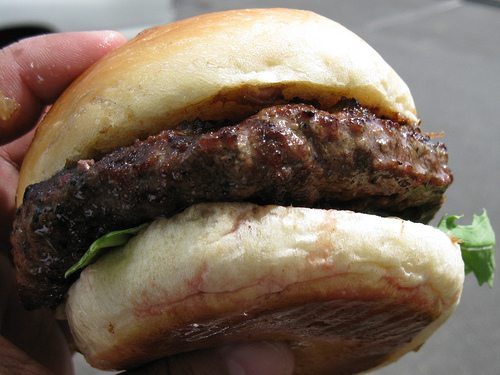 The world’s first scientifically produced burger was tasted for the first time by food critics on Monday, who described it as “close to meat”.

The burger, which consisted of tens of billions of stem cells produced in a lab, cost more than £200,000 to produce and was backed by Google co-founder Sergey Brin.

Hanni Ruetzler, the food critic who tried the burger, described it as “close to meat, but not that juicy”.

The scientist responsible for producing the burger, Mark Post, professor at Maastrict University in the Netherlands, said it would be a while before the burgers are available for mass consumption. He added that the project is “a good start”.

A recent report commissioned by the Department for Environment, Food and Rural Affairs (Defra) emphasised the importance of sustainable food sourcing, including eating less meat in order to maintain a healthy diet while not displacing food supplies. It also identified a link between the amount of food consumed and the impact that this has on the environment.

Reacting to the milestone for artificially produced food, Friends of the Earth’s Kirtana Chandrasekaran, said, “It’s really positive that people are talking about alternatives to meat.

“Realistically, consumers won’t be able to buy these burgers in shops anytime soon – but we can reduce our meat eating now which would be better for our health and we’d still have varied diets.”

Chandrasekaran added, “Eating less meat and producing it less intensively will help to solve enormous challenges like climate change and feeding the world.”

Writing on his blog, Toronto-based ethicist Chris MacDonald looked at the ethics of producing the world’s first synthetic burger.

He concluded, “On the whole, I think the development of lab-grown burgers is an excellent thing, from an ethical point of view. Or at least, very promising.”