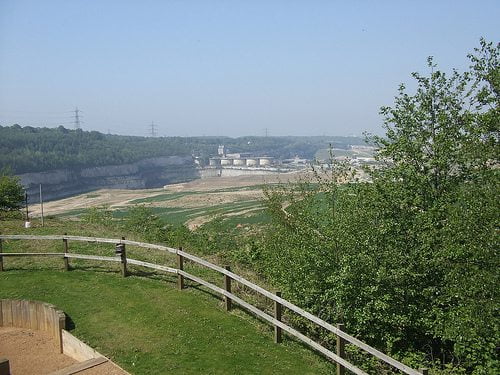 The chancellor George Osborne has confirmed plans for a new 15,000 home ‘garden city’ in Ebbsfleet, Kent, in an attempt to help solve Britain’s housing crisis.

The government will invest £200m in a project that has been expected for some time.

The area on the Thames Gateway has a large amount of undeveloped, brownfield land. It also has a stop on the HS1 rail line that connects London with the Channel Tunnel, and is 19 minutes from St Pancras station.

“In Ebbsfleet there is the land available, there is fantastic infrastructure with the high speed line”, Osborne told the BBC.

“It’s on the river, it’s in the south-east of England where a lot of the housing pressure has been. And crucially you’ve got local communities and local MPs who support the idea.”

In 2007, planning permission was granted for a 6,000 home project in Ebbsfleet Valley. To date, only 150 new homes have been built in the area.

Gareth Johnson, Conservative MP for Dartford – where the majority of Ebbsfleet Valley sits – said he “very much welcomed” the breakthrough.

“For whatever reason a developer has not been forthcoming and the recession didn’t help”, he said.

“What this announcement does is enable the proper infrastructure to be put in place.”

The head of the thinktank Centre for London said, “Successive governments have long seen the development potential in the Thames Estuary.

“There is huge scope for new homes and infrastructure to transform the region into a thriving commercial and cultural centre, all the while easing the strain on housing.”

However, some critics have questioned whether the project will deliver anywhere near enough homes needed or if it is even anything new.

In 2012 the government and local councils agreed with a developer to build 22,000 houses at Ebbsfleet.

The shadow housing minister Emma Reynolds said, “The government has had four years to make progress on garden cities but instead of getting on and building them, ministers have spent their time making empty announcements and suppressing reports.”

The president of the Liberal Democrat party Tim Farron added that the initiative would, “barely scratch the surface” of the 300,000 homes a year that were needed.

Under the original plans for the controversial HS2 rail line, Ebbsfleet would also be connected directly to the north of England.

However, in a report put forward today, HS2 chairman Sir David Higgins suggests that the proposed link between HS1 and HS2 be scrapped to cut costs.

Garden cities were in the news recently after a competition offering a £250,000 prize sought entries that looked to help solve Britain’s housing crisis.

Speaking to Blue & Green Tomorrow, Tory peer Lord Wolfson – chief executive of retail chain Next and the founder of the prize – explained, “British people live in the smallest, most expensive housing in Europe, pretty much without exception.

Wolfson said that while they have not set an exact definition of a garden city, first and foremost the winning entry would have to be green “in the sense of open spaces, gardens, parks, walkways; a city that would harness the beauty of nature as well as the splendour of architecture.”