Google has come out on top of Greenpeace’s Cool IT Leaderboard, which has judged the internet superpower to be the most revolutionary tech company in the clean energy sector. Alex Blackburne looks into the news.

Greenpeace’s Cool IT Leaderboard recognises and ranks the global information technology (IT) companies with the most endeavour and innovation in the clean energy sector.

Google has come out on top of Greenpeace’s Cool IT Leaderboard, which has judged the internet superpower to be the most revolutionary tech company in the clean energy sector. Alex Blackburne looks into the news.

Greenpeace’s Cool IT Leaderboard recognises and ranks the global information technology (IT) companies with the most endeavour and innovation in the clean energy sector.

With the ranking now onto its fifth version, Google has topped the charts.

In November last year, the internet search engine giant announced it was scrapping its renewable technology research and development department. On the face of it, a backward step.

But in place of this, the tech supremo said it was instead favouring straightforward renewable energy investment, and so pledged $850m into renewable technologies.

“Other institutions”, it said, “are better positioned than Google to take this [renewable energy] research to the next level”. It’s not a bad plan B, though. 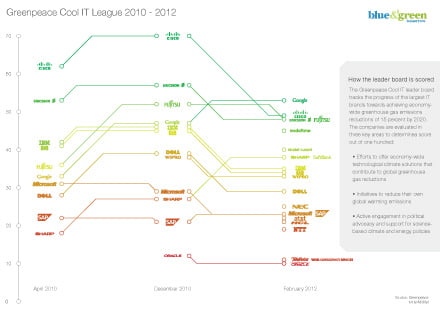 Commenting on Google’s place at the top of the Cool IT Leaderboard, Greenpeace International IT analyst, Gary Cook, said, “Technology giants have a real opportunity to use their power and influence to change how we produce and use energy.

“Google tops the table because it’s putting its money where its mouth is by pumping investment into renewable energy.

“The IT sector might like to consider itself forward-thinking, but it is keeping far too quiet while the dirty energy industry continues to exert undue influence on both the political process and financial markets”.

Google nabs the number one spot off networking giant Cisco, which slips to second, with Ericsson and Fujitsu in joint third.

Apple and Facebook, two of the leading innovators in technology, weren’t included after both failed to meet the Leaderboard’s criteria.

Greenpeace said that Apple had “not demonstrated leadership or elected to pursue market opportunities to drive IT energy solutions that many of its competitors have, despite record profits and large cash reserves”.

Facebook’s omission was for a similar reason, though Greenpeace state that a recent change in policy from the social network giant will mean it will be included next time around.

Cook concluded by issuing the tech industry with a challenge, saying that too many companies talked a good game, but didn’t implement what they had promised.

“The IT industry must use its influence, innovative spirit and technological know-how to overcome the dirty energy companies who are holding on to the status quo, and holding us back from a transition to a renewable energy economy”, he said.

“What we’re seeing is a lot of talk from companies about moving toward clean energy, but so far, not much of action”.

Your money can push the renewables industry higher up on the mainstream agenda. Ask your financial adviser how you can invest ethically, or fill in our online form and we’ll connect you with a specialist ethical adviser.