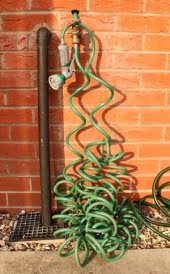 Seven companies in southern and eastern England have announced a hosepipe ban for Easter to cope with the continuing drought. Those over 40 years of age will perhaps be reminded of 1976…

Seven companies in southern and eastern England have announced a hosepipe ban for Easter to cope with the continuing drought. Those over 40 years of age will perhaps be reminded of 1976…

The severity of the current water shortage is made clear by the total hosepipe plan announced, which uses every single prohibition available to water suppliers in the 2010 Flood and Water Management Act. In essence, the restrictions will mean that customers will not be able to use hosepipes to water gardens, fill ponds or pools, for cleaning, or for recreational purposes.

What’s the penalty for flouting the law? According to the legislation, those who contravene the prohibitions are guilty of an offence and liable to a fine not exceeding level 3 on the standard scale—up to £1,000.

Martin Baggs, chief executive of Britain’s biggest supplier, Thames Water, said the restriction was not taken lightly and knew it would be “unpopular” but they “want to encourage everyone to continue to voluntarily save as much of this precious resource, so there is enough to go around”.

The restrictions come as no surprise given that they follow environment secretary Caroline Spelman’s official declaration of drought in the south east of England in February.

The Government and the Environment Agency have been warning about the prolonged dry conditions since last winter. Peter Simpson, managing director of Anglian Water, said, “Our region has had its driest 18 months for a century, including two dry winters, which have robbed us of the rainfall we need to refill rivers, reservoirs and aquifers.

“This is the first time Anglian Water has imposed a hosepipe ban in more than 20 years, but we believe this is the most sensible and responsible action to take to safeguard customer supplies, for this year, next year and beyond.”

Simpson also had a message to encourage everyone to do their bit, “We are not telling people to stop doing what they have to, but to adapt their behaviour to reflect the severity of the situation. The message is—do what you can”.

In the summer of 1976, the severity of the drought led to tap water to homes being cut completely in some areas, with people resorting to using standpipes in the streets to collect water. Given that Britain has just experienced a drier winter than that of ’76, we should take the water saving message very seriously indeed.

Clean water is something that we often take for granted. But, believe it or not, 768 million people—that’s 11% of the population—are still without such a luxury, despite the best efforts of the Millennium Development Goal. Such statistics put the pesky inconvenience of a hosepipe ban into real perspective. Visit Pump Aid’s website to find out how you can help others who face permanent water shortages.

And don’t forget to turn off the tap while you brush your teeth.