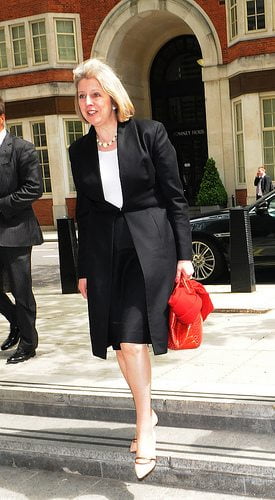 Theresa May is on a collision course with EU leaders over a quota scheme for EU countries to take an equal share of migrants coming to Europe through the Mediterranean region.

The Home Secretary said she “disagree[d] with the suggestion by the EU’s high representative” Federica Mogherini that migrants should not be sent back against their will.

In an article in The Times, May said that “such an approach would only act as an increased pull factor across the Mediterranean – and encourage more people to put their lives at risk”.

She wrote, “This problem is not new but it is growing. It demands a clear response from European nations. But if we are to stop it, we must adopt the right approach. We cannot do anything which encourages more people to make these perilous journeys – or which makes it easier for the gangs responsible for their misery”.

Instead, she urged the EU to focus of combatting the criminal gangs smuggling migrants to the continent.

Many of the migrants are from North African countries and some pay gangs thousands of pounds to smuggle them across the Mediterranean and into Europe. There have been a number of humanitarian concerns in recent months as thousands were shipped on unseaworthy boats, leaving many dead.

The quota scheme announced earlier this week by the EU has sparked tensions within the European Community over the issue of Mediterranean migrants, with some countries declaring their support and others pledging to block the plans.

Spain, Italy and Malta which are often the first and only countries to deal with the crisis have called for stricter aid rules to ensure the cost is spread among EU countries. Germany, France and Austria have already declared their support.

The law can only be passed in European legislation however, if a large number of member states vote in favour of it. Whilst some migrants are fleeing from war-torn countries such as Syria, a study had previously suggested that 22,000 migrants died trying to reach Europe in the last 14 years, with climate change and extreme weather events becoming a more relevant factor in forcing people to flee their home countries.