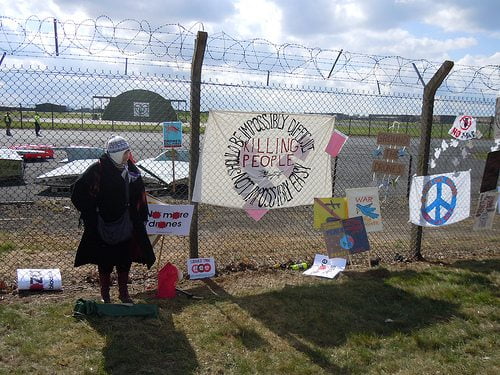 Protestors arrested at RAF base want to ‘put drones on trial’

Campaigners who were convicted of criminal damage after breaking through a fence at an RAF base in Lincolnshire have said they wanted to “put drones on trial”.

The six protestors were arrested by civilian police after cutting through the fence at RAF Waddington, home to 13 Squadron, which operates unmanned drones.

Lincoln Magistrates’ Court heard that they were on the base for around half an hour, during which time they planted a peace tree, distributed leaflets and took photographs.

The Rev Keith Hebden, one of the protestors told Blue & Green Tomorrow, “Pilots at Waddington are killing – we were entering a war zone.”

He spoke of the “terror” being faced by children in countries where the drones operate, such as Afghanistan, when the drones are flying overhead.

“What is particularly worrying about drones is that it fuels terrorism by instilling terror in the countries where they operate. We haven’t had a war on our shores since the Second World War, but this government are bringing this war to our shores. We want to save lives.”

Hebden said they were astounded at the support from District Judge John Stobart. “He couldn’t make it any clearer that he believed in our cause, but he is duty bound to law”.

In his ruling, Judge Stobart said, “I find, and not without some hesitation, that the lack of proximity or relationship between the defendants and those in Afghanistan who may be either targeted or hit accidentally by these drones is insufficient. I therefore, with a very heavy heart, find all the defendants guilty.”

The Judge ordered that the protestors pay £10 compensation to RAF Waddington and court costs.

Hebden added, “The lack of clarity in law meant that the judge’s hands were tied. Because we wanted to save lives that are thousands of miles away, our defence that our crime was necessary was rejected. He pretty much invited us to appeal.”

Last week, Edinburgh University withdrew investment holdings in Ultra Electronics, a company which produces component parts for US drones, because it was not “socially responsible”.