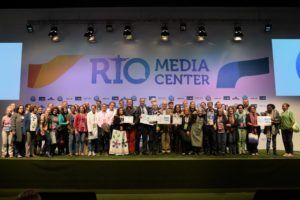 Rio De Janeiro has become a Fair Trade Town during this year’s games marking a golden moment for the olympic city.

Rio De Janeiro has become the largest city in Latin America to be declared a Fair Trade Town. The official ceremony took place against the backdrop of the Olympic Games currently taking place in the Brazilian capital.

At the ceremony, Fairtrade Brasil’s president Naji Harb presented the certificate to the Secretary of Economic and Social Development. “Now Rio de Janeiro is part of a network of more than 1800 Fair Trade Towns all over the world,” said Harb.

These cities are educating consumers and raising awareness about Fairtrade benefits and its impact on changing the lives of the marginalized small farmers all over the world.

Rio De Janiero is now the second town in Brazil to receive Fair Trade Town status, following Pocos de Calda in 2012. Brazilian consumers can purchase Fairtrade certified products such as acai juice, lemon, honey, fruit and coffee at more than 200 shops, cafes and restaurants across the capital. Many of these are local products, grown by Fairtrade certified producers in Brazil. Coffee from Fairtrade farmers in Minais Gerais is also being served at the Olympic Games sites.

The Fair Trade Town campaign was first launched in 2001 in Garstang, Lancashire, under the initiative of Bruce Crowther, a local Oxfam supporter, and the Garstang Oxfam Group. The initiative aimed to promote Fair Trade certified goods in the town, and since then it has become worldwide.

Fairtrade’s network in the UK include over 600 Fairtrade Towns, 1350 Fairtrade Schools and 170 Fairtrade Universities, and 7,500 Fairtrade Places of Worship.

Fairtrade works with more than 1.6 million farmers and workers in developing nations enabling them to earn a sustainable income and the Fairtrade Premium that they can invest in vital community, business and environmental projects, including programmes addressing food insecurity.

Selling on Fairtrade terms enables these farmers to receive better prices for their products, and to invest in their future. There are currently 42 Fairtrade certified producer organisations in Brazil, over half of which are coffee producers.

The ceremony ended with a reception and the opportunity to sample caipirinhas made with Fairtrade limes grown by Brazilian farmers.

View a video of the ceremony here

To find out more about Fairtrade in Brazil, visit http://www.fairtradebrasil.com.br/home