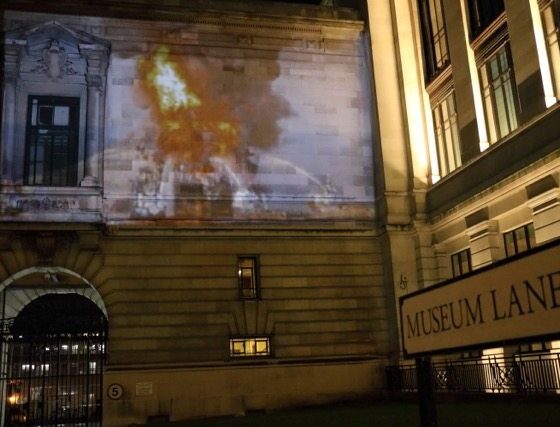 Late Saturday night, campaigners projected large satellite images of BP’s Gulf of Mexico oil spill onto the side of the Science Museum, in protest at the company’s sponsorship of the museum’s Cosmonauts exhibition, which comes to an endthis Sunday. The “projection protest” followed the announcement that BP’s controversial sponsorship deal with the Tate will end in 2017, after years of mounting pressure from artists and campaigners. The protest also marked the start of British Science Week. Anti-oil sponsorship groups have said campaigns will escalate at other oil sponsored institutions, including the British Museum and the Science Museum, to make sure deals with BP are not renewed.

Alice Bell, from the “Progressive Science Institute”, said: “As we celebrate the start of British Science Week, it’s important to remember the ways in which this amazing human endeavour we call science can be applied to some really dangerous ends. BP is sponsoring a space exhibition at the Science Museum, so we projected space-science images of the Deepwater Horizon spill on the museum’s wall. Museum sponsorship is just the public face of a much larger problem – the oil industry has its grip on way too many of our finest scientific institutions. It’s time the Science Museum cleansed itself of BP logos and the American Geophysical Union dropped sponsors like Exxon too.”

During the protest, a member of museum staff who had secured the BP sponsorship admitted to the protesters that BP had always been a problematic company. In December, the museum’s director, Ian Blatchford, accepted the Pushkin medal in person from Vladimir Putin, for his role in the exhibition. In the same month, the Science Museum decided not to renew its sponsorship deal with the oil company, Shell, after the campaign group, BP or not BP?, revealed how Shell had influenced the museum’s climate science exhibition. Yesterday, the Tate announced that BP would be ending its 26-year sponsorship deal with the gallery and now attention has focussed on other oil-sponsored cultural institutions in London and across the UK.

Chris Garrard, from creative campaign group, “BP or not BP?”, said: “BP’s sponsorship of the Science Museum isn’t philanthropy. It is a cheap way for BP to gain the social legitimacy it needs in order to press ahead with new high-risk projects, like the four ultra deep-water wells it now has planned for the Great Australian Bight, where BP would drill for a fossil fuel we can’t afford to burn. BP clearly hasn’t learnt from its ‘gross negligence’ in the Gulf of Mexico – a spill in Australia would be catastrophic.”

BP currently sponsors the Science Museum’s Cosmonauts exhibition and collaborates with the museum on the Ultimate Stem Challenge, a competition for schoolchildren. BP continues to sponsor the British Museum, the National Portrait Gallery and the Royal Opera House, although all three institutions are currently in discussions as to whether to renew their deals with BP.

The protest was organised by three campaign groups working on climate change, science and sponsorship: BP or not BP?, the Progressive Science Institute and Feral X.