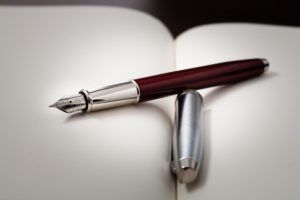 In 1839 Edward Bulwer-Lytton coined the phrase ‘the pen is mightier than the sword’, prior to that figures from Shakespeare to Thomas Jefferson expressed the same idea. They were all early acknowledgers of a shifting power base, from those with a capability for violence to those with a mastery of words.

Gone are the days where problems can be solved by a slap with the glove and duel to the death. No single factor has caused this transition but undoubtedly the growing complexity of the world has played a big role. It is very hard to fight a way through a refugee crisis or a credit crunch.

The perplexing situation of the UK government to still even be contemplating the Hinkley Point nuclear project is not so the UK can snuggle up to the Chinese Red Army. It is because of China’s increasing political and corporate power.

Throughout its ascendance the pen has been the realm and tool of politicians. Whether you like what they are saying or doing, the pen is their weapon of choice. But the power base is shifting. Capitalism is driving deregulation and a power transfer from governments to corporations. As the UK government fights to keep sovereignty from the EU with one hand, it dishes it out to big business with the other. The irony of Brexit is that trade agreements such as TTIP – backed strongly by David Cameron, which will transfer vast power from national governments to corporations – is likely to be a far more important long term issue and distributes wholly undemocratic power but gets little air time.

The corporate take-over of the western world has been well document and, for better or worse, is hard to dispute. With it comes a stark difference, politicians (in theory) act on behalf of their electorate, corporations act to maximize shareholder value. As control moves from governments to corporations, the role of the consumer and their shopping trolley becomes more and more important. Rather than voting with a ballot paper, we increasingly vote with our consumption.

But with power, comes responsibility and this is where it falls apart. A great disconnect exists between cause and effect. Everything we consume has a direct impact on the world around us. If we choose to consume cheap meat it is likely we are supporting animal cruelty. If we choose to fly everywhere, we are driving climate change. A good illustration of how broken reality is occurred to me recently, between mouthfuls of Foie gras someone was telling me how much they ‘loved animals’.

Following a new report, Professor Maarten Hajer, UN expert on food production and the environment, has called for governments to tax meat consumption because of the environmental damage the industry causes. The report shows 24% of greenhouses gases and a staggering 60% of species loss is driven by the meat and dairy industry. It is clear that meat consumption has far bigger implications than just the welfare of the animal eaten.  The links are there and need to be made.

Companies respond to consumption, if their goods are purchased they produce more.  As the UK government steps back from ever environmental policy it can, the power shifts to corporations. Consumers though, if they choose, are able to wield this. The real danger is when consumption is purely driven by price, or even worse inertia, and capitalism produces a ruthless race to the bottom, with environmental, humanitarian and societal interests given no protection and being torn to shreds.

It is a double edged sword; our consumption can be hugely positive or hugely negative. Many people ask what difference one person can make, so decide they won’t bother to take an interest or change their consumption. The simple response is that if everyone takes this view, then the free-market model that the western world is currently flogging is in the long term a dead horse.

As power bases change, so do the mechanisms for exercising power. The strength of consumers to wield power is increasing but until the cause and effect of our consumption is fully considered, the world is left in a perilous position, because sadly, you can’t have your Foie gras and be an animal lover.