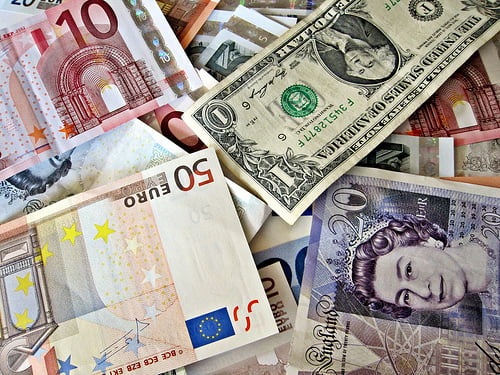 Twenty-eight years ago today, pound notes were discontinued after more than 150 years of circulation. The former chancellor Lord Lawson delivered the news, claiming that the change from note to coin would add longevity and durability to the sterling. A look back into the history of money shows how banknotes originated and whether their time as a means of currency is coming to end.

The Bank of England first issued a banknote in 1694 to help King William III raise money to fight a war against the French. British citizens were given paper receipts from the bank as proof and representation of storing their gold. This has since developed into our modern day banknotes. To this day there are just under £55 billion worth of notes in circulation in the UK.

The Chinese invented the first type of paper note back in 118BC. Unable to find enough copper to make the coins needed, pieces of deerskin were used to stand for 40,000 units of a number of coins.

And yet, despite such a deep-rooted history, the banknote has struggled in recent days to justify itself as a primary means of currency. With risks of counterfeiting, not to mention a short lifespan, is it time for a more modern equivalent to be introduced?

Such a decision has already been made in certain countries, with the polymer note the popular choice.

Australia was the first country to issue the plastic currency in 1988, and has gone 100% polymer. At the moment, 23 countries use polymer banknotes, with Brunei, New Zealand, Papua New Guinea, Romania and Vietnam among those using purely polymer notes as their currency.

More recently, in November 2011, the Bank of Canada began circulating $100 polymer banknotes in an effort to combat counterfeiting and reduce costs. The country claimed its $100 bill was the world’s most advanced banknote, as it includes a hologram within the note’s transparent window. It also shows a circle of numbers that match the value of the denomination when held up to light.

A $50 polymer denomination followed in March this year, with a $20 bill expected soon. By the end of 2013, new $10 and $5 bills will have been introduced, and all Canadian currency will be printed on polymer.

One of the major reasons for converting to polymer currency is the extended lifetime. Polymer notes last at least two-and-a-half times longer than paper notes, reducing processing and replacement costs, as well as the environmental impact. The introduction of plastic currency saves production costs because fewer bills are produced, as well as the fact that polymer notes are recyclable at the end of their lifetime, compared to current cotton currency, which often ends up in landfill.

Cleanliness is an advantage to countries with warmer climates, with humidity less likely to affect paper currency.

“The tropical climate is a challenging environment for banknotes, especially because of high humidity and high temperatures”, polymer researcher Stane Straus told the BBC. “This causes paper notes to absorb moisture, thus becoming dirty. Polymer notes, on the other hand, do not absorb moisture.”

The technology has not been without its issues, however. Haiti and Cost Rica were the first to trial polymer banknotes during the 1980s; yet the quality of ink was below what was thought necessary. A plastic note was also introduced in the Isle of Man in 1983, using British technology, but withdrawn in 1988, with ink problems suspected as the cause, also.

There are lingering questions over the necessity of polymer notes, though, with some concerned with their lack of practicality, as well as the fact that the security risks with traditional cotton banknotes are decreasing.

“Paper is much more secure than it used to be and the new £50 note, for example, has features that are extremely hard to counterfeit”, said Tom Hockenhull, curator of the Modern Money exhibition at the British Museum.

Hockenhull refers to new cotton notes, which contain transparent polymer windows in to minimise the risk of counterfeiting. It is thought that polymer notes are not as secure as this modern cotton note, as it is considered easier to replicate.

A further problem, particularly for developing countries, is the initial cost of producing polymer notes. They are most expensive to make and their longevity can only be maximised with the right recycling facilities.

There have recently been developments in the UK regarding currency change. Bank of England officials have expressed their concerns that the £5 note is not durable enough, which, as a low denomination, changes hands quickly. A source close to the Bank of England told The Independent, “This is at the evaluation stage. A decision won’t be made for the next year or two and production a little while after that, but a plastic £5 note is a possibility.”

It is clear that traditional banknotes – regardless of their 300-year history and heritage – have their drawbacks – whether it is security, reusability or longevity – and many countries have already looked at alternative forms of currency. Whilst polymer currency might present a large initial financial outlay, their practical advantages cannot be ignored.