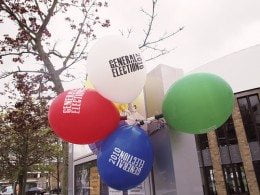 Vote for Policies, an online service that allows people to compare manifesto policies without knowing which party they belong to, has raised almost £10,000 towards its £20,000 crowdfunding campaign with 12 days left. The organisation aims to improve voter turn out and create more accountability by focusing on party’s policies and promises.

The target amount for the crowdfunding campaign is “a challenge, but achievable” and would help Vote for Policies build on its success, Matt Chocqueel-Mangan, founder of the organisation, said.

He explained, “So far what we have got is a very large experiment, with interesting results, and the fact that is has had as many users as it has without any marketing or funding is great. But to take it to the next level we need a lot of people using it so that you can get a broad demographic from the UK population.”

The money raised through the crowdfund will be used to ensure that the service can reach more people in the run up to next year’s general election. In the six weeks running up to the 2010 election, over 280,000 people used the service. This time, the organisation hopes to reach 5 million people, to help them to understand which party their values and views mostly closely align with.

In the long term, Vote for Policies wants to encourage more voters to engage with politics. It wants voter turn out rates to top 80%, after over a third of the electorate failed to vote in the last general election. Increasing the number of people who cast their vote will help Vote for Policies achieve its vision of creating a “sustainable democracy”, Chocqueel-Mangan said.

However, engaging with the public about politics and encouraging more people to take an active role in the area is a challenge. The media is often full of spin and bias, turning voters off, and tends to focus on a few areas of policy, whilst the rest of the issues are ignored. This has led to many voters feeling unsure of how to vote for.

Chocqueel-Mangan commented, “I think a lot of people don’t know who to vote for because it’s very confusing, I don’t think people trust politicians to deliver on their promises, I think there is a lot of media bias and there’s also a lot of negative campaigning that turns people off from voting.

Vote for Policies aims to be part of the solution in creating a more accessible democracy by focusing on party manifestos. Currently, manifestos are not user friendly. They are often difficult to read and overly vague. The Vote for Policies platform presents users with the manifestos of each of the parties in particular areas, such as education, health and crime, allowing them to select the one they believe is best, without the spin. At the end of the survey users are shown which political party their answers suggest they should vote for.

When asked if the political parties themselves should be taking action to make their manifestos more accessible, Chocqueel-Mangan said they should.

“I think the forward thinking parties will realises it makes a lot of sense. But the first step, and the most effective step to get better manifestos, is to start voting based on the contents of them now.”

The party that does take the first step in improving their connection with the electorate could potentially boost their support as a result.

People who have used the Vote for Policies service are often surprised by their results, demonstrating a need for manifestos to be more accessible so that voters can use policies to make informed decisions.

If Vote for Policies’ crowdfunding goal is reached, the site will incorporate new features, allowing users to give feedback on their results and their voting intentions, and making it easier for people see what everyone else is thinking in their constituency.

Chocqueel-Mangan concluded, “It could be a real game-changer next year and the crowdfunding campaign is essential to making it happen. We’re particularly interested in hearing from organisations that might want to pledge to be associated with our work and audience, and a socially positive, innovative brand.”

To learn more about Vote for Policies, the crowdfunding campaign and to support the service click here.