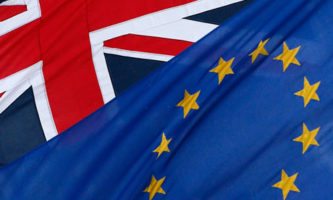 The poll also shows that social media is playing a significant role in this campaign, with 16% of people viewing it as their most important referendum information source, the same as the proportion who view friends as the most important when it comes to Thursday’s vote.

However, there are stark demographic divides within Britain when it comes to who voters count on for their EU knowledge.

There’s also a clear gender gap, with women being far more likely to trust family on the EU – 23% of women view family as a crucial port of call about the referendum, compared to just 13% of men. The proportion rises to 27% among 18-24 year olds, but is just 15% for over 65s. Over 65s count on friends much less regarding the EU, with just 12% viewing them as a ‘most trusted’ decision-making helper, compared to 23% of 18-24s.

On party backgrounds, Conservatives are more likely to rely on newspapers – 25% of Conservative supporters to 20% of Labour backers, while Labour supporters rely much more on social media – 23% to the Tories’ 13%. Just 25% of UKIP supporters trust the BBC most for their EU information, and only 4% see the government as most important for their decision-making. A startling half – 48% – of UKIP backers say the Leave campaign itself is their most important source of information on the EU referendum.

The Electoral Reform Society argue it’s more essential than ever, given the huge demographic divides and the differing trustworthiness of different information sources, for all voters to access comprehensive, independent resources on the referendum. The ERS are calling for the public to use Better Referendum – an impartial online toolkit on the vote, featuring both official campaigns and independent experts discussing a variety of central issues.

Katie Ghose, Chief Executive of the Electoral Reform Society, said: “While it’s great that people are getting their information about the EU from a variety of sources, in these last couple of days it’s crucial that voters get the facts and opinions from both sides to help them reach an informed decision. The debate has been incredibly negative and left many still searching for answers to fundamental questions about the UK’s relationship with the EU.

“The big demographic divides in how people are getting their information shows that we need to do all we can to create a level playing field in this last couple of days, in order to ensure we’ve had a genuinely balanced debate with equal access to the views and facts. There’s a real concern that some voters will just be getting their views from whichever ‘echo chambers’ they are part of – and that we could have a decision based on one-sided information sources.

“Our Better Referendum tool aims to bring all the arguments and the facts on the big issues together and in one place. In this last couple of days, it’s vital that the public have all the resources they can to make a truly informed decision this Thursday.”