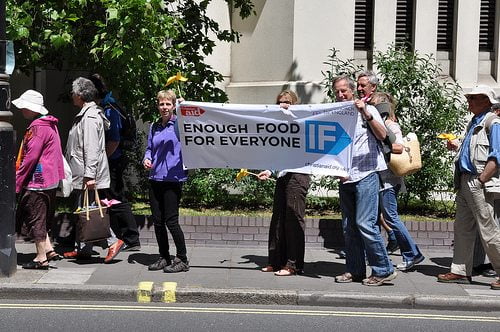 World leaders have pledged to fight global hunger and malnutrition, signing an agreement on the same day that campaigners flocked to an anti-hunger rally in London.

Signatories of the Global Nutrition for Growth Compact document committed on Saturday to improve the lives of 500 million pregnant women and young children by 2020, through helping local governments develop nutrition strategies and effective farming. Donors including the UK are set to mobilise some £2.7 billion in the fight to end malnutrition.

A settlement was reached on the same day as thousands of people gathered in London’s Hyde Park, asking world leaders at the G8 summit later this month to fight global hunger. The initiative was launched by the Enough Food for Everyone IF campaign, which is backed by over 200 organisations and charities.

Speaking at the Global Nutrition for Growth event, David Cameron said he was “immensely proud of the IF campaign”.

He added, “We will never beat hunger just by spending more money, or getting developed nations and philanthropists to somehow ‘do development’ to the developing world.

“It’s all about helping those in developing countries take control of their own destiny.”

Reacting to the pledge, Friends of the Earth food campaigner Kirtana Chandrasekaran said, “Urgent action is needed to tackle hunger in Africa, but this ill-conceived initiative threatens to make the situation worse by enabling international firms to increase their control of food and land, at the expense of local farmers.”

Meanwhile, David Bull, spokesperson for the Enough Food for Everyone IF campaign, said, “David Cameron and his fellow leaders must now focus on getting an historic breakthrough on tax dodging and land grabs at the G8, which deny poor countries the resources they need to feed their own people.

“A G8 deal on tax and land which helps poor countries is badly off track. The prime minister must urgently intervene in the next week to turn this around.”