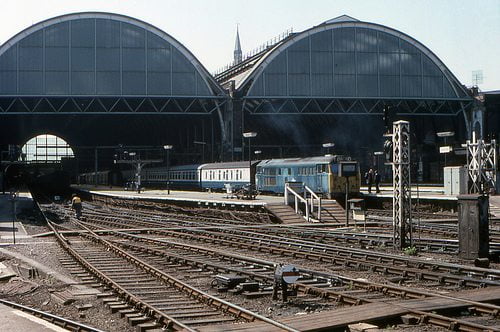 East Coast is the only state-owned intercity rail franchise. It was rescued in 2009 after Sea Containers and National Express failed to make it a success. Since then, it has been one of the most successful lines, delivering £640m to the taxpayer in 2009. It is also the most efficient line, according to the independent regulator.

The majority of British people (66%) would like to see the rail network back in public hands. The bulk (58%) want East Coast specifically to remain in public hands. This is evident even among Conservative voters, with 48% saying yes to it being publicly owned compared to the 28% that said no.

The East Coast Mainline is a 393-mile long, high-speed electrified railway between London King’s Cross and Aberdeen, linking Peterborough, York, Newcastle and Edinburgh, with spurs to Lincoln, Leeds and Glasgow. The line was created in the mid-1880s and roughly follows the path of the A1, the Great North Road. Its principal operator is East Coast, which carries 19 million passengers per year.

After rail privatisation in 1996 the intercity line was won by Sea Containers and branded Great North Eastern Railways, or GNER. GNER was stripped of the franchise in 2007 for poor financial management. National Express East Coast then won the franchise, but defaulted on its franchise agreement and it passed into public hands on the November 14 2009. East Coast (under Directly Operated Railways) will have paid back £1 billion to the Treasury at the end of its franchise in February 2015.

Keolis-Eurostar (Eurostar is part owned by the government through London and Continental Railways), FirstGroup and Virgin-Stagecoach have been announced as finalists for the franchise. The fiasco surrounding the West Coast Main Line franchising process has meant our relatively new transport secretary, Patrick McLoughlin, is keen to get this re-privatisation right.

One of the motivations for the government’s need to get out of rail is the new rolling stock, which East Coast will lease in 2018. This is estimated to cost £200m per year, significantly more than the £85m it paid in 2012, but still less than the £302m Virgin paid for its more modern carriages. The average age of an East Coast train is 27 years, with some pushing 40, compared to a national average of 19 years. Virgin’s trains are nine years old on average.

These are the MPs along the route. Write to your MP if you live on the route and ask them to support an early day motion opposing the privatisation of East Coast. 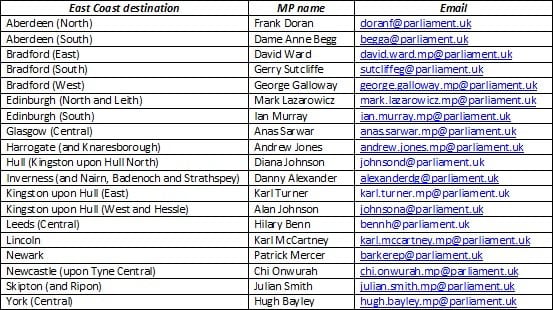 You can read the independent analysis of rail efficiency here.You can also sign the petition in supporting East Coast remaining in public hands. It’s a shining example of what public ownership can achieve.