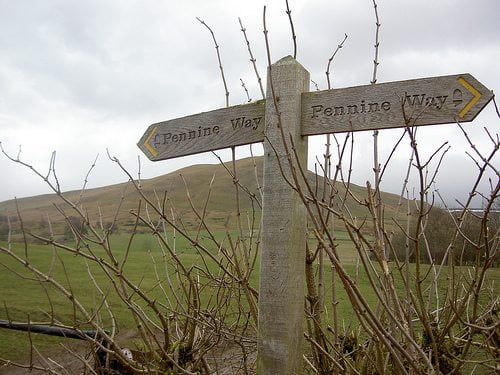 On June 22 1935, Daily Herald writer Tom Stephenson wrote an article entitled Wanted: A Long Green Trail. In it, he called for “a Pennine Way from the peak to the Cheviots”.

Stephenson imagined that the route would be “a faint line on the Ordnance Maps which the feet of grateful pilgrims would, with the passing years, engrave on the face of the land.” Thirty years later, he got his wish, when the Pennine Way became the UK’s first official National Trail.

Nearly five decades on from its opening, it still serves as the backbone of England and is a popular haunt for walkers, ramblers and hikers alike. As many as 250,000 people walk at least part of the route every year.

The Pennine Way is 267 miles long. It begins in Edale, in the Peak District national park, and ends at Kirk Yetholm in Scotland. Along the way, it passes through the Yorkshire Dales and Northumberland.

The 30 years between Stephenson’s calls for a Pennine Way and its actual inauguration marked a long and often arduous battle between countryside organisations and the government.

But in 1965, with Stephenson 72-years-old by this time, the Pennine Way was unveiled as the first official National Trail – a public footpath maintained by the government agency Natural England.

Another man to have helped publicise the route is Alfred Wainwright, a British walker and author who died in 1991. He pledged to buy half a pint of beer at the Border Hotel in Kirk Yetholm – at the Pennine Way’s northern end – for anyone who had walked the full distance.

If you live in, near or have visited the Pennine Way and are interested in ethical investment, read The Guide to Sustainable Investment 2013 for more information, and The Guide to Ethical Financial Advice 2013 to find a specialist ethical financial adviser near you.