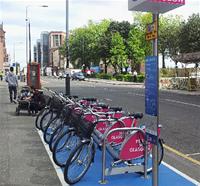 Glasgow’s sustainable transport sector has received a boost with a £600,000 cycle hire scheme. Campaigners have welcomed the initiative, stating it will simultaneously improve citizens’ health and cut pollution.

The initiative, which comes as the city gears up to host the Commonwealth Games, will see 400 bikes available to hire at 31 locations. The bikes are can be hired for £1 for half an hour, with a £10 cap for up to 24 hours. Alternatively, customers can become a member and pay an annual fee.

The scheme is being run by NextBike, which operates similar schemes in 80 cities worldwide, amounting to 15,000 bikes, including ones in New Zealand, Germany, Switzerland and Dubai.

Glasgow City Council leader Gordon Matheson said, “The scheme will play a key role in driving forward Sustainable Glasgow as it will lead to a reduction in carbon emissions, leading to an improvement in air quality and will give people ready access to a healthy method of travel.”

Environmental group Friends of the Earth has welcomed the initiative and its boost to sustainable transport but urged the council to go further in order to tackle “Glasgow’s air pollution crisis”.

Emilia Hanna, an air pollution campaigner at the organisation, said, “This scheme will improve people’s health, reduce carbon emissions, and help tackle Glasgow’s air pollution problem. Cycling keeps you fit, your heart healthy and can increase your life expectancy. It is the green, modern way to travel.

“This is a positive first step in the right direction, but more still needs to be done to tackle Glasgow’s air pollution crisis. Air pollution is a silent killer, causing over 300 deaths in Glasgow each year alone.”

To complement the scheme, the council should set a traffic reduction target for the Glasgow’s city centre and create a low emissions zone, as a way to tackle pollution from cars, buses and freight vehicles, Hanna added.