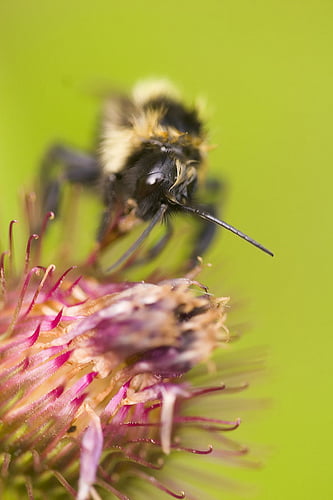 Many of Britain’s wild bees are in serious decline, including the large mason bee and the great yellow bumblebee, according to a report published by the University of Reading.

Commissioned by Friends of the Earth (FOE), the study investigates the extent to which populations of 12 species of bees native to the UK have declined.

And findings show dramatic drop-offs in numbers, just over a week after EU member states voted to ban the use of neonicotinoid pesticides that research suggests are harmful to bees.

The large mason bee faces extinction in Wales, whilst the potter flower bee has suffered major declines, with small pockets remaining only along the south coast.

Another – Britain’s most iconic species, the great yellow bumblebee – has experienced an 80% decline in numbers.

Twenty species of native bee species in the UK have already become extinct since 1900, and it looks as though that figure could increase in the coming years.

The University of Reading study points out that intensive farming and urban development are two of the main drivers behind bee decline – both of which have depleted the valuable food resources that bees depend upon, including flower-rich grasslands.

“The way we farm and use land across the UK has pushed many rare bees into serious decline”, said Simon Potts, leader of the study.

“I’m calling on the government to act swiftly to save these iconic creatures which are essential to a thriving environment and our food supply.”

The report is one of many to have looked at declines in bee populations. A 2012 study found that it would cost farmers £1.8 billion a year to artificially replace pollination services that bees provide for free.

Friends of the Earth has called for a bee strategy, aimed at farmers and gardeners, to be implemented to reduce chemicals that are harmful to bees, whilst increasing feeding and nesting sites.

A coalition of campaign groups, including Friends of the Earth, took to the streets of London last month to urge the government to ban the three pesticides that scientists have said harms bees.

Despite voting against the EU proposals to outlaw the use of the pesticides, the UK could well be forced by Europe to introduce such a ban.