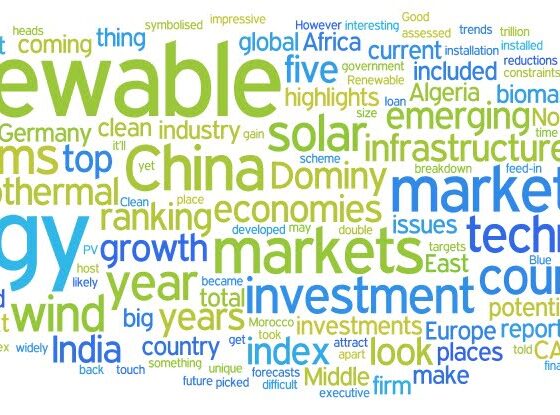 The CAI report ranks 40 countries in terms of their renewable energy markets and infrastructure, as well as their suitability for individual technologies.

China, followed by the US, Germany, India and the UK, make up the overall top five.

Out of the four all-encompassing renewable energies – wind, solar, biomass/other and geothermal – China scoops first place for wind, the US tops solar and geothermal, and Germany holds biomass.
Phil Dominy, senior executive in sustainability and cleantech at Ernst & Young, told Blue & Green Tomorrow how it calculated the ranking.

“We look at what the current hotspots in terms of investments are, so we look at analyst reports and forecasts for the next five years, government targets, and we have our own estimations, too”, he said.

“In terms of total investment over the next five years, we expect these 40 countries to be the ones that are ahead.

“There may be other, more emerging markets, like in the Middle East or North Africa, but they’re starting from almost nothing, so there is very high growth but they’re still not huge yet.”

Each parameter was weighted to determine an overall score out of 100. Then, to create the All Renewables Index, Ernst & Young took a 65% contribution from technology and 35% from infrastructure.

Speaking about the results of the index, Dominy said, “The big thing is that the developed market – places like Western Europe and the US – is going to struggle this year, and that’s symbolised by the recent German and UK reductions to the feed-in tariff rates.

“These sorts of markets are struggling to cut back on its budget, so it’ll be the emerging markets that will probably gain the highlights over the coming years, so places like Latin America, the Middle East, North Africa, Asia, India, China, and Eastern Europe to an extent as well.”

Looking towards the future, Dominy said that Ernst & Young’s research suggests there will be a wholesale shift in the ranking.

“If you look at the top ten, it’s still predominantly European”, he pointed out.

“Over time, the top ten, apart from probably China and India, will gradually slip down and others will move up the index from the middle or lower.”

Algeria, Egypt, Israel, Jordan, Saudi Arabia and Oman are picked out by the firm as countries with big potential for renewable energy growth.

Another – Morocco – is already well on its way, after it became the first country to announce it was to play host to the innovative Desertec scheme in December last year, with Algeria quickly following suit.

A breakdown of the index can be found in the infographic below.

Ultimately, the Ernst & Young ranking highlights some interesting trends in the global renewable market. It’s widely reported that this year is going to be tough economically, so this is certainly not something that is unique to the renewables industry.

One thing is clear; the clean energy industry is spreading. To invest in renewable energy or make other more sustainable investments, get in touch with your IFA, or fill in our online form. If you want to support green energy at home, contact Good Energy, the UK’s only 100% renewable electricity provider.