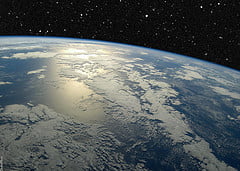 A lot of people equate weather with climate but it’s not that straightforward. David Tebbutt digs deeper.

“Global warming? Geddaway. Look at all that snow. Hasn’t snowed like this since I was a nipper, and that was before the roads were full of cars and the skies full of aeroplanes.”

You can imagine your dad or your nan saying that. And they’d be dead right. But, if that’s the case, what’s all this nonsense about global warming, or climate change as we’re now obliged to call it?

That is the deniers’ argument, that the weather ebbs and flows regardless of what we do to the atmosphere, so we may as well carry on as we are. The warmists point to the greater frequency of peculiar weather events and suggest that this is caused by humans messing with the climate. Then the scientists come marching in with their own views on what we’re doing, how dangerous it is, and so on.

But none of them, not even the Met Office, is capable of grasping the fantastic complexity of the world’s environmental systems. They use information from things like greenhouse gas emissions, population growth, heat from industry, and so on, to offer best guesses and, it has to be said, these do veer towards human-induced climate change.

Planet Earth At the long-term and global level they point towards a general warming trend. At a local level, they suggest that other factors come into play. This is where it gets complicated, because the general public would prefer simple, easy-to-understand predictions. But that is not the scientific way. At a local level the weather is unpredictable, especially in a small offshore island like the UK, which has a varied topology and is surrounded by sea. We all know that the weather just a few miles down the road can be totally different from our own. A lot also depends on land use: farmland has a different effect on humidity and air circulation than a town, for example.

The best the meteorologists can do is to deploy massive computers to try to model the climate over a long period and the weather over a shorter timescale. We humans occupy a very thin layer of the Earth’s atmosphere and we mostly want answers relating to just that bit, which we get in our beloved weather forecasts. But the climate folk look at the whole atmosphere and, indeed, a lot of the ocean too. Between them, ocean currents and the atmosphere act to redistribute heat around the planet. Just over 70 percent of the Earth’s surface is water and we’ve still got only a vague idea about the tiniest fraction of it, so no doubt they’re right to look.

The more the scientists learn about the past and the present, the more information they can put into their models. And, it seems logical to say, the more sensors they have sampling various aspects of our environment – the acidity and temperature of the seas, the cloud cover and precipitation of various parts of the world, for example – the better they will become at predicting what’s to come.

Since the oceans cover so much of the Earth’s surface, you can be certain that large chunks of the world remain unobserved at the surface. Satellites play an increasingly important part in resolving this difficulty, but the bottom line is that the computers (or, more accurately, the scientists feeding the data to them) still have to guess or extrapolate from the readings of the nearest sensors, be they surface- or space-based.

There is also the matter of that great hot ball in the sky that sustains us though we take it so much for granted. (We always forget to look up – Ed.) We’ve worshipped it for centuries without grasping its potential to provide us with an eternal source of clean energy if only we had the wit to catch it and distribute it on a wide scale.

Coming back to the extreme weather events, the floods, the droughts, the snow and so on, on a geological timescale, these are natural variations. There’s no reason why we shouldn’t have a bit of cooling followed by a bit of warming, floods followed by droughts. After all, the Earth went through over 30 ice ages before we were even around, so no one can explicitly nail mankind as the root cause of all climate problems. However, it won’t be long before the increasing frequency of current “1 in 400 years” events will make even the most reserved climate scientist reconsider mankind’s influence on both the climate and the weather.

But let’s not get confused that they are the same thing. Or that they’re equally predictable. Except in the most general terms, they’re not.