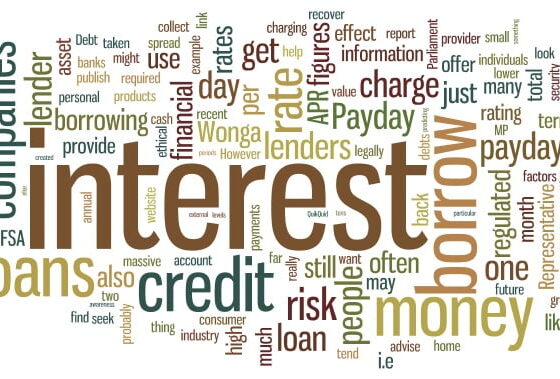 Usury, the charging of interest on money lent, was outlawed in England by Christian churches until 1545 when Henry VIII signed into law ‘An Acte Agaynst Usurie‘. The rest, as they say, is history.

Usury, the charging of interest on money lent, was outlawed in England by Christian churches until 1545 when Henry VIII signed into law ‘An Acte Agaynst Usurie‘. The rest, as they say, is history.

Borrowing money is not a bad thing. Countries that borrow money to invest in economy-boosting projects, such as infrastructure, will get their money back through tax receipts. Organisations can spread the cost of expensive capital investment to ease their cash flow and boost future sales.

Individuals can use borrowing to buy homes (a third of us have mortgages), improve our homes (a quarter of all loans) and buy cars (two fifths of all loans). Just like business and governments, we can ease ourselves through periods when there’s more going out of the household purse than coming in – like at Christmas.

Even the most affluent will borrow from time to time, or have children who might need to borrow. It may be better to save and only spend what you have but it’s not possible for all of the people to do this all of the time.

Loans are simple, generally well-understood, well-regulated products.  An organisation lends you money and charges you interest based on four key factors: how much you want to borrow, over how long, whether you have any security (a home or other asset) and how much they trust you to repay the debt.

The more you borrow the lower interest rate you tend to pay. The longer you borrow the lower your monthly payments will be, although you’ll end up paying more overall. If you have an asset that you’re willing to offer up as security you’ll pay less as the risk to the lender is less, but you risk losing the asset if you don’t repay the debt.

Where people often get annoyed is around the final factor, the question of trusting you to repay the debt, or in financial terms, your ‘risk’ or credit rating.

Your credit rating is created from a combination of personal and non-personal risk factors. A Lender will take into account your income and your current commitments to see what you have left each month.

They’ll look at your track record of repaying debts (for example county court judgements or missed payments on credit cards or loans).

While organisations have their own risk models they also use the pooled data of three credit reference agencies; Experian, Equifax and Callcredit, that all try to outdo each other on accurately predicting your credit worthiness.

The other thing a lender will consider is your similarity to other people they’ve lent money to. As with all financial products, past performance is no indication of future behaviour, so they’ll match you to someone else who shares your characteristics.

As a lender they will probably be borrowing the money themselves (gone are the days when most banks used their own deposits to lend, apart from Mutuals who still do this), which costs them roughly 1%. If they ascertain that you have 10% chance of not repaying them from your credit rating they charge you their costs plus the risk of 11%. Where interest rates start to get frightening for people is when the lender thinks you have a 20%, 30%, 40% or greater chance of not repaying. Your interest rate rises accordingly.

So far, so simple.

Obviously, this is spread out across tens of lenders and millions of borrowers. It is also heavily regulated and monitored by the FSA, recent payment protection issues notwithstanding.

Non-FSA regulated lenders are a cause for concern

Where there is cause for concern is in the unregulated space. Loan sharks have been with us since day one and there’s little that can been done about this illegal activity short of ever greater vigilance, prosecutions of lenders and better consumer awareness.

The recent innovation has been pay day loans companies which offer short term loans and have the veneer of respectability but can charge as much as 4200% annual percentage rate (APR), i.e. the total cost of borrowing including fees if you borrowed the money for a year what would you repay.

Sarah Creasy MP (Lab) and Stephen Tomlinson MP (Con) have recently taken this up and tabled a motion in the Houses of Parliament to look at payday loan companies.

One provider, Wonga, says on its website, “We don’t charge anything like the large Representative APR” saying they only charge “1% per day”. The equivalent is an “annual rate of interest of 360% per year”.

Worse still, if you borrow £100 for one day you pay £106.52 back or just over 6.5% interest. That’s the compounding effect of fees and interest being paid on fees and interest, which Representative APRs were designed to inform us about.

In response John Moorwood of Wonga said, “The Representative APR includes the fee and is also made clear on the website – we provide all the information we are legally required to provide and also a very transparent total cost of repayment.

“All the information can be found easily on the home page before anyone applies. The total cost is actually the information customers tell us they really value and it’s something you don’t find too often with traditional lenders”.

This is not to pick on Wonga, as there are many similar companies (Payday UK, QuikQuid, Payday Express, PayDay Financial, KwikCash, and UKPayDayToday). However, the author witnessed Wonga’s chief executive, Eroll Damelin, excitedly spelling out the investment opportunity this company represented and the incredible returns it could deliver to various private equity funds and venture capitalists in 2006.  The promise seemed to be massive returns for investors from massive interest rates for borrowers.

These companies often only lend to those with historically better than average credit scores so the chance of most of their borrowers going bad is very small but they still have staggering interest rates, and profits. However, many turning to a payday loan are clearly in some financial distress.

A short term loan might just help you out but if it goes wrong at these levels of interest rate it would be nothing short of catastrophic. There’s lots of matey language and bleating on the sites about how these companies perform a valuable social function and they never charge the interest rate that they “legally required to provide”.

All have a small statement in their terms and conditions to the effect that, “if you don’t work with us and we can’t recover the money over a reasonable period, your account may be passed to an external partner”, i.e. a debt collector who will use all and any means necessary to recover the cash.

While that is true of all lenders, no high street lender would get away with charging 4,200% APR without an outcry in Parliament and from regulators.

In conversation with Blue & Green Tomorrow, Frances Coulson, R3 President said, “These payday loans tend to have high interest rates and often those who use this type of credit find themselves in a vicious debt cycle.

“It is a sign that a person is struggling to manage their money and we would advise these individuals to seek professional budgeting advice, or the correct form of debt relief to get their personal finances back on track.

“It is best to speak to a provider that offers a range of solutions.  Payday lenders and DMP (Debt Management Plan) providers usually sell a particular product, which may not offer the best solution for an individual to repay their debts.

“Payday loan companies are regulated by the OFT and they must have a consumer credit license to operate. As far as we know, the OFT do not collect figures (at least they don’t publish them) in terms of how many loans are taken out per year, the value of these loans and the number rolled-over.

“The banks are regulated by the FSA – and their lending figures are well documented and published. We suggest that the OFT should collect figures on the payday loan sector and publish these figures.”

It really is time for the Government to act and regulate this new industry more rigorously and push them into the tender embrace of the FSA, or have we learnt nothing from the debt crisis we’re still wallowing in.

If you want to borrow from an ethical source such as a responsible bank or credit union then read our report on ethical borrowing. If they won’t lend to you then you probably shouldn’t borrow more.

You can seek advice urgently from a debt counsellor (the charity Consumer Credit Counselling Service, or industry backed National Debt Line can help) who can advise you on how to bring safely down your debt.