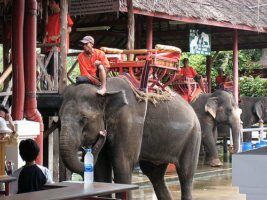 The appalling cruelty inflicted on Indian elephants to meet growing demands from the tourism industry for elephant rides and shows has now got the attention of the Indian government – who might shortly take a huge step to end elephant rides in popular tourist destinations in Goa and Rajasthan this year.

Most tourists go on elephant rides because they love elephants. They don’t know about the intense physical and psychological pain involved. Baby elephants are cruelly taken from their mothers, and beaten into submission to give rides and perform tricks for tourists. They endure horrendous captive conditions for decades. This includes chaining and close confinement, loneliness and isolation from other elephants – with whom they would naturally form bonds – and deprivation of food and water.

World Animal Protection continues to expose the abuse being inflicted on hundreds of these magnificent animals in India and highlight how tourists and travel companies such as TripAdvisor can stop tourist rides in their tracks before it’s too late.

If left unchecked thousands of elephants in India and across the world will face lifetimes of cruelty and abuse for tourist entertainment. The once in a lifetime opportunity of riding an elephant can mean a lifetime of misery for it – if you can ride it, hug it or have a selfie with it, the chances are it’s cruel for the wild animals, so don’t do it.

Filming at Amber Fort in Rajasthan

Amber Fort, also known as Amer Fort in Jaipur, Rajasthan is one of India’s major tourist hotspots offering elephant rides to people visiting. The fort has an estimated 5,000 people visiting and taking rides from one of the 114 elephants trained to carry tourists up steep roads in blistering heat.

The welfare concerns at Amber Fort:

• Elephants used for entertainment in their early years suffer an extremely cruel and intensive breaking-in process. This is done so they can be used to perform and be ridden for tourist entertainment. This process involves severe restraining with ropes or chains and the elephant can only move when commanded. Severe pain is often inflicted with pointed metal bull hooks, wooden battens, and whips.

• 90% of elephants at Amber Fort had one or more problems with their foot pad, abscesses on their eyes and severe wounds from the seat on their back.

• The elephants are not fed properly with a natural diet. Instead they are given chapatti (roasted bread made of wheat) and sugar cane– too much of this is bad for them.

• 68% of elephants were reported to have insufficient or non-existent provision for water.

Day in the life of an elephant at Amber Fort:

• Elephants used for rides are chained up in small stables, by trees or in private houses.

• There’s no possibility for the elephants – highly intelligent and social animals – to interact with other elephants. They are kept in confinement and there is no prospect of free movement after a gruelling day of carrying tourists on their backs.

• Elephants are taken out in the mornings to offer rides to tourists and their first port of call is to descend through chaotic road traffic in Jaipur.

• They are equipped with riding benches on their backs and adorned with garments, blankets and head covers in extreme heat.

• Once tourists are on their backs, elephants make an exhausting walk up a steep hill to the Amber Fort palace.

• Also accompanying the elephant is a mahout, sat on the elephant’s neck, guiding it with a bull hook and ready to beat it at the top of its head to direct the elephant.

This is an unnatural way of life for elephants because wild animals belong in the wild. For example, female elephants are highly social, living in matriarch-led family groups which can consist of up to 20 females and sub-adults. Males travel alone visiting matriarchal herds or form temporary social groups with other males. This is very different to the life they have held in captivity.

• World Animal Protection can provide images and footage from Amber Fort to help paint the picture of the day in the life of an elephant. There is also an opportunity to film there.

World Animal Protection has secured 108 global travel companies to no longer offer visits to venues with elephant rides and shows in any of their markets. Among these are popular brands from across the world, like World Expeditions and Kuoni Travel UK.

The cruelty endured by elephants and other wild animals at tourist attractions is gaining attention amongst the public, as well as the travel industry. Despite this large number, there are still a number of travel companies who are yet to commit to ending elephant rides and other cruel elephant entertainment, such as TripAdvisor.

World Animal Protection has a long history of campaigning to end the use of wild animals for entertainment. We ended bear dancing in India, Turkey and Greece by working over a decade with local partners and government officials.

Over the past four years we’ve engaged travel companies across the world and 108 have committed to no longer sell and promote elephant rides and shows to their customers. World Animal Protection will continue to expose the suffering of wild animals in entertainment and look to educate the 4m tourists who will visit wildlife tourist attractions every year.

We now want TripAdvisor, the largest online travel website, to recognize the huge opportunity to help protect the 550,000 wild animals suffering at the hands of irresponsible tourist venues. With 300 million web hits per month their influence is immense, they need to put that to good use and do what is right for wild animals.

Over half a million people have signed our petition, join the movement: http://www.worldanimalprotection.org.uk

• There are simply no responsible elephant rides or shows. Elephants are not domesticated. They are wild animals in captivity that need to be tamed and trained in order to be ‘safely’ used for rides and shows.

• All elephants used for riding and performing need to be ‘broken’ at a young age in order to accept human control. By the time you come to ride an elephant, it may look at peace; but this is because its spirit has been broken.

• The breaking-in process of elephants for any type of activities that require direct contact with people (like rides or performances) requires severe physical and psychological abuse. Furthermore, their physical well-being is forever damaged by the jobs they are forced to do.

• Keeping elephants for tourism damages their conservation status. Reproduction rates of elephants in captivity are extremely low and do not meet the demand for new elephants in the tourism industry. Consequently, elephants are poached from the wild to fuel tourist entertainment. This is considered a major threat to the wild Asian elephant population, which has declined dramatically over the last century, also because of habitat loss.

• The animals that are now used in these venues are old working animals and also captured from the wild or bred in captivity to spend their lives in chains. Across Asia it is estimated that as many as 75% of the adult elephants, used for tourist rides today, have been wild caught, although the number is difficult to validate.

• Many tourists see elephant rides as the highlight of their holiday. However, this wish often stems from a lack of awareness of the abuse involved. As soon as they become aware of the suffering caused by elephant rides and shows, their enthusiasm quickly wanes.