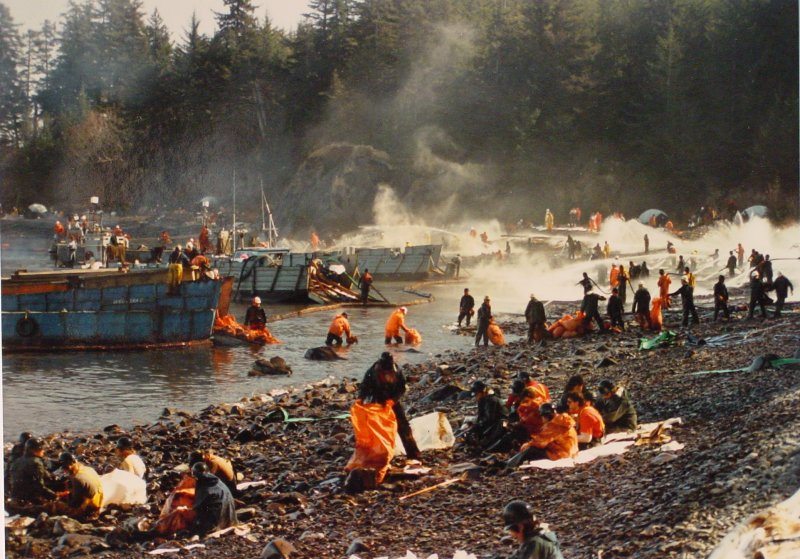 Twenty-five years ago today, the oil tanker Exxon Valdez ran aground in Prince William Sound, leading to 11m gallons of oil spewing into the sea off the coast of Alaska. The effects of the disaster are still being felt today.

The oil spill remains one of the largest to have occurred in US coastal waters, with over 1,000 miles of coastline coated in thick oil. The accident had a disastrous effect on wildlife. According to Greenpeace, the immediate effects killed 250,000 sea birds, 3,000 sea otters and 250 bald eagles. In addition, the campaign group added that the oil spill has affected the whale population of Prince William Sound, which stood at 340 before the Exxon Valdez spill and is now just seven.

Despite a huge clean-up operation, oil is still present in the region and the National Oceanic and Atmospheric Administration (NOAA) continues to monitor the affects on the area. It is estimated that there is still around 23,000 gallons of oil in the sand and rocks of the affected shoreline.

Earlier this month, ExxonMobil – which owned the Valdez – unveiled plans for 10 major new oil and gas projects in Russia, Canada, the Gulf of Mexico and Papua New Guinea. The company, in partnership with Russian oil giant Rosneft, is also exploring the possibility of drilling in the Arctic.

John Sauven, executive director of Greenpeace, commented, “In its wake, the [Exxon Valdez] oil spill left hundreds of thousands of dead birds and other wildlife. Today the impact of that disaster is still felt and those effects should stand as a warning beacon for the international community that oil and the Arctic just don’t mix.

“The Arctic and surrounding environment simply can’t withstand oil spills like the Exxon Valdez. Surely, today of all days, the time has come for those who wish to exploit the fossil fuel reserves in the Arctic that the risk is just too great.”

Following profit falls in the third quarter of 2013, ExxonMobil responded to a shareholder resolution last week by deciding to report on the financial risks posed by climate change.

The landmark decision will focus on the ‘stranding’ of fossil fuel assets in an effort to be more transparent for investors, and marks the first time the company will assess its own business model. It is hoped that other fossil fuel companies will now follow suit.

This increased transparency and acknowledgement of future financial risks are small steps towards sustainability for Exxon – but there is a long way to go.

It has been 25 years since the Exxon Valdez ran aground, causing one of the worst oil spills in history. How long before the next one?