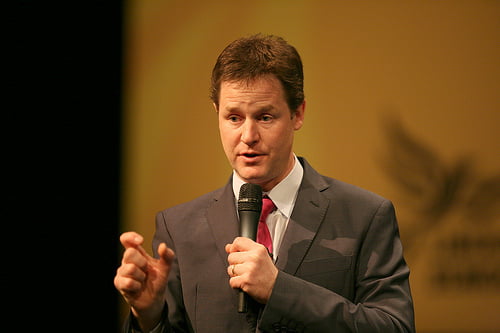 Deputy Prime Minister Nick Clegg said in a speech that the Government is still focused on green matters, and that sustainable development should be given a high priority in our economy.

Clegg, who was talking at KPMG in Canary Wharf yesterday, addressed the widely-held assumption that “cash-strapped citizens cannot be expected to live more sustainably”, saying that it was believed that “they have other, more urgent worries to contend with”.

But, he said, “This new wisdom, however widely held, is utterly wrong”, before going on to dispel the misconception.

He added, “Yes, right now climate change may be lower down some people’s thoughts. Yes, we need to be sensitive to businesses’ needs.

One of the biggest themes to come out of the speech was the promise of improved cohesion with energy suppliers, to avoid households paying a higher-than-desired monthly bill.

“As of this autumn”, Clegg announced, “Your supplier will have to contact you, every year, with the best tariff for you. And, if you call them, they’ll have to offer you the best deal too.”

He added that the much talked about Green Deal scheme, which is set to come into place in the autumn, “will offer businesses and homeowners energy saving home improvements but at no upfront cost.

“Customers will have energy saving measures installed in their homes by trusted suppliers from high street brands to local traders.”

Blue & Green Tomorrow agrees with the need to make homes more energy efficient, and we welcome the plans put in place by the Green Deal, but this message needs to be paired with the knowledge that energy saving is equally important.

Clegg also asked, “How can we rebalance our economy away from its overreliance on the City of London?” And he swiftly answered his own question: “By capitalising on our competitive edge in green industries, generating jobs and wealth outside of London and the South East.”

This response is somewhat laughable, given the fact that the Government had the opportunity to do just that, through a £3 billion project called the Green Investment Bank (GIB), which it unceremoniously opted to be hosted by Edinburgh and London.

Avid readers of B&GT will know that in February, we published a series of features that whittled down the 32 bidding cities for the GIB to one, based on a number of criteria, and we suggested that Nottingham would be the most appropriate location.

The deputy prime minister’s speech, whilst overwhelmingly focused on green growth, doesn’t really run parallel in with the Coalition Government’s recent budget statement, in which the chancellor, George Osborne, barely skirted over the edges of environmental issues.

It seems strange that, after going green wasn’t even mentioned in the budget, Clegg would come out now and dispel myths about sustainability whilst highlighting the Government’s apparent support of environmental issues.

The answer lies within his speech.

“Don’t believe the naysayers when they tell you environmentalism is off the agenda”, claimed Clegg, who also announced that he would be representing Britain at this summer’s Rio+20 talks.

“And don’t be in any doubt of our commitment to being the greenest government ever.”

The fact is, the so-called “naysayers” – Blue & Green Tomorrow sometimes included – are saying nay for a reason. Case in point: the hugely unsustainable budget statement.

If the Government really is the greenest ever, surely it should be publicly doing something about it? Surely, it should be championing renewable energy to guide us to a low-carbon economy, not claiming that continuing to extract finite resources from the North Sea is the answer?

Surely, it should be looking to entice more people to install solar panels through the feed-in tariff scheme, not trying to cut subsidies, threaten jobs and alienate valuable sectors?

And above all, surely it should be making its many bold claims a reality, getting people on its side, and implementing strong green measures to not only guide us towards a low-carbon economy, but also for that economy to thrive.

Responding to the speech, Friends of the Earth’s head of campaigns Andrew Pendleton said, “Nick Clegg is right to slam the Chancellor’s anti-environmental agenda – building a strong economy and protecting the planet are two sides of the same coin.

“Our dependence on increasingly expensive gas, coal and oil has led to rocketing fuel bills – the Lib Dems must insist on a fresh approach to sort out this mess.

“By developing clean British energy and cutting energy waste we can create thousands of new jobs and build lasting foundations for a clean and prosperous economy.”

B&GT will continue to scrutinise the Government’s green policies to make sure it lives up to, or at least attempts to be, the “greenest government ever”.

Until then, it’s important that individuals don’t get put off by the lack of strong environmental action displayed by the Coalition.

We know that a move away from dirty fossil fuels in favour of clean renewable energy is undoubtedly the biggest and most urgent requirement to create a low-carbon economy.

Therefore, opting for Good Energy – the UK’s only 100% renewable electricity supplier – as your energy provider, is a massive first step that you can take.

On top of this, investing your money with companies or funds that positively affect the environment not only helps build the low carbon economy we so desperately need, but is fast becoming the smart way to invest. Ask your IFA or fill in our online form and we’ll connect you to a specialist.