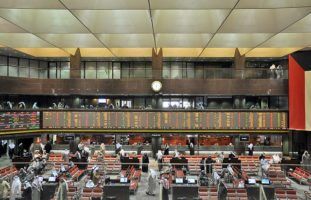 The Luxembourg Stock Exchange (LuxSE) has become the first global stock exchange to bring in a platform for green financial instruments.

Commenting on the launch of LGX, Robert Scharfe, CEO of LuxSE, said: “New issuance of green securities has taken off since COP21.

There is a real desire for change.

The green market has enormous potential but this needs to be matched by interest from investors. By setting strict standards for green securities, LGX aims to create an environment where the market can prosper. The upcoming COP22 event will focus on preparations for the Paris Agreement to enter into force. With LGX, a dedicated platform for both issuers and investors, we are granting the solution for financing green projects.”

LGX gathers issuers that dedicate 100% of the raised funding to green investments. The platform goes live today. It will immediately become home to the majority of the 114 green bonds listed on LuxSE, worth over $45 billion. LGX marks the first time that a stock exchange requires green securities to adhere to strict eligibility criteria, including:

· Self-labelling as green or equivalent (e.g. climate-aligned). The issuer has to clearly state, during the application process, the intended green nature of the security.

· Use of proceeds. Need of a clear disclosure that the proceeds are exclusively used for financing or refinancing projects that are 100% green, according to the GBP[1] or CBI[2] eligibility taxonomy. 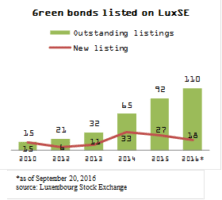 “Ex-post reporting is far from being the market standard. The bold decision to introduce it as an entry requirement stems from our ambition to be able to guarantee that securities on LGX are genuinely green. Such reassurance is what investors seek as they increasingly expect issuers to be crystal clear about the use of proceeds,” the CEO added. Access to LGX is banned for securities on the excluded categories list comprising of, but not limited to: nuclear power production; trade in CITES; animal testing for cosmetics and other non-medical products; medical testing on endangered species; fossil fuels.

The LGX concept has been developed in line with best practices set out by Climate Bonds Initiative, International Capital Market Association (ICMA) and World Wildlife Fund (WWF). LGX has its own logo – a colour variation of the standard LuxSE trademark. “An issuer who does not meet LGX eligibility criteria can still list on our markets, but the ‘bar is higher’ for entry to LGX. Having said that, we encourage issuers to go further than the minimum requirements and really leverage this platform to create new standards on the quality of communication with investors,” Robert Scharfe added.

Green market is our duty

With over $42 billion in new issuances globally, 2015 was another record year for labelled green bonds. As estimated by the Climate Bonds Initiative, in 2016, the green bonds issuance will reach $100 billion. The already thriving green bonds sector received an additional boost after the COP21 conference in Paris last year during which 195 countries agreed on keeping the rise of global temperature below 2 degrees Celsius. The International Energy Agency estimates that the world needs $1 trillion a year until 2050 to finance a low-emissions transition. The market for green finance is growing fast, and yet it represents an almost invisible fraction of overall capital market funding.

“That’s because investors are sceptical, and understandably so, about how the proceeds for green projects are being allocated. It’s not enough to say ‘green is green’. Investors are becoming more sophisticated and are demanding more granular information. Equally, issuers must be convinced of the benefits a truly green bond market can provide. In particular, the visibility for their securities and trust gained among investors,” noted Mr. Scharfe.

He said LuxSE aims to become the main centre for sustainable finance in Europe, and continued: “As the leading exchange for green bonds, LuxSE can play a vital role in shaping the future of green finance. In fact, we regard the development of this market as our duty. Users of international capital markets look to us to provide the best generally available information to investors. With respect to the green bond market, we are committing the same efforts to promote improved visibility by providing greater transparency and more trust.”