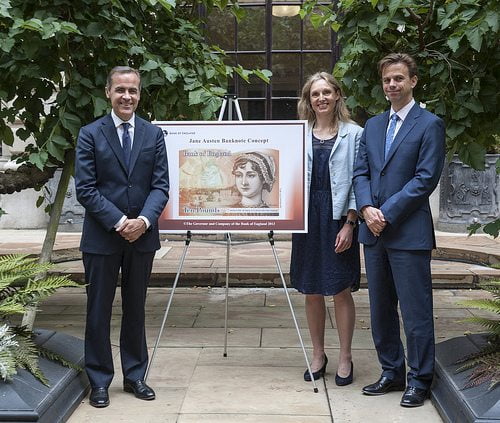 Early 19th century author Jane Austen will be the face of the next set of £10 notes, the Bank of England has announced.

The decision to remove Elizabeth Fry from the £5 note from 2016, announced earlier this month, sparked debate, as it would have left women unrepresented on British currency.

However, the Pride and Prejudice author will now replace Charles Darwin in 2017 after a high-profile campaign.

Protestors delivered an online petition of over 30,000 signatures to the bank, with many dressed as historical feminists such as Emmeline Pankhurst.

The petition, on Change.org, read, “An all-male line-up on our banknotes sends out the damaging message that no woman has done anything important enough to appear.

“This is patently untrue. Not only have numerous women emerged as leading figures in their fields, they have done so against the historic odds stacked against them which denied women a public voice and relegated them to the private sphere – making their emergence into public life all the more impressive and worthy of celebration.”

It is believed that the author was already in line to replace Darwin. Sir Mervyn King, the former governor of the Bank, said in June that Austen was “quietly waiting in the wings”.

On Twitter, the chancellor George Osborne wrote, “[Current governor] Mark Carney’s choice of Jane Austen as face of £10 note is great. After understandable row over lack of women, shows sense and sensibility.”

The note will feature Austen’s portrait, along with an image of Godmersham Park, her brother’s home and the inspiration for a number of novels, and Austen’s writing table.