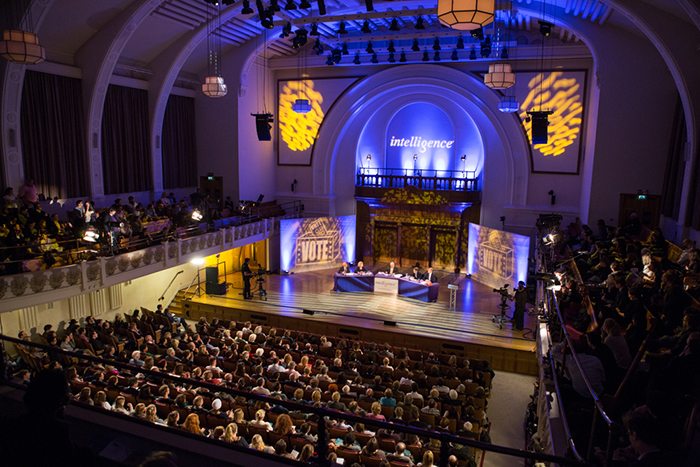 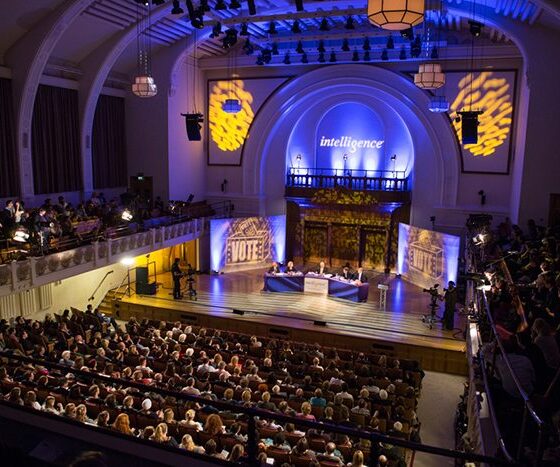 The Intelligence Squared democracy debate took place at just the right time for Blue & Green Tomorrow’s Guide to Sustainable Democracy. Held in London’s Cadogan Hall in front of a sold out audience, the debate explored whether democracy is always the best form of government.

Accepted wisdom in the developed world is that democracy is best. But there are those that argue that democracy can lead to illiberal outcomes such as the oppression of minorities, economic stagnation and inaction on global issues such as climate change.

Hosted by Nik Gowing of BBC World News, speaking for the motion (“One size doesn’t fit all: democracy is not always the best form of government”), was Martin Jacques, senior fellow of the Department of Politics and International Studies at Cambridge and author of When China Rules the World. Accompanying him was Rosemary Hollis, professor of Middle East policy studies at City University and author of No friend of Democratisation: Europe’s role in the genesis of the ‘Arab Spring’.

Meanwhile, speaking against the motion was Ian Bremmer, an American political scientist and author of The End of the Free Market: Who Wins the War Between States and Corporations. Accompanying him was Andriy Shevchenko a member of Ukrainian parliament and an active participant in the pro-European protests.

Martin Jacques, senior fellow of the Department of Politics and International Studies at Cambridge, spoke for the motion. Photo: Intelligence Squared

At the outset, 44% of the audience didn’t know their view on the motion. Thirty-eight per cent were for the motion and only 18% against. This was clearly an open-minded gathering and it promised to be a lively debate.

Jacques led the debate, arguing that the developed world’s democratic impulse followed our economic growth. During the Industrial Revolution, only a tiny fraction of the population had any power. Economic wealth created the conditions for a democracy to flourish. Imposing democracy on countries that are at a different stage developmentally will not work, for example Iraq and Egypt. Conversely, China has prospered for 35 years without democracy, demonstrating that prosperity does not depend on democracy.

Without a prepared speech, Bremmer countered this perspective passionately and amusingly by extolling the virtues of government by the people and of the people. He said we shouldn’t be ashamed to support what feels good and right in that sentiment, which is freedom under the rule of law and the right to choose our leaders.

Declining democratic engagement in the US and elsewhere is more down to the capture of the state by corporate and vested interests and an alienation of the people. Russia, which is essentially undemocratic, has seen a flight of capital and talent due to the instability of non-democratic nations.

Hollis accused Bremmer of demagoguery as an example of one the flaws in democracy. She returned to the Jacques theme that we attribute our good fortune to our hard work, liberal capitalism and democratic system, when in fact our democratic system evolved because of our wealth. The developed world extolling the values of democracy while restraining it elsewhere means your view on democracy depends on where you stand in the global pecking order.

Shevchenko held a helmet worn by protesters in Kiev to show us that this wasn’t some abstract debate, but affected real people today. He made the point that only six of the top 30 countries by gross domestic product (GDP) are not democracies. He pointed out that only three of the top 47 countries by the human development index (HDI) are not democracies. He argued that is easier to correct errors in a democracy. The values of rule of law, free speech, human rights and respect of the individual should not be so easily abandoned.

The first contribution from the floor argued that the real debate is about freedom, not democracy. The mobile phone will do more than anything to liberate people. One audience member argued that we live in a sham democracy with an unelected House of Lords and monarchy.

Those speaking for the motion returned to the theme that the first step towards democracy is economic growth. Bremmer countered that we need resilience, not just growth, and that autocracies are not resilient. He cited Canada and the Scandinavian countries as exemplars of democracy. Hollis countered that an ideal system in developing countries was a benign dictatorship, with Bremmer responding that the benign aspect of dictatorship was impossible to achieve with nepotism and unelected succession.

At the end of the debate, only 3% of the audience didn’t know their view on the motion - compared to 44% at the beginning. Photo: Intelligence Squared

He pointed out that, as in Russia, in China we have seen those who have done well move their money out of the country and into the developed world as they understand the fragility of their system of government.

Hollis made the point that we speak with a forked tongue, extolling the virtues of democracy at home and in public while propping up dictatorship abroad. She argued that we actually wouldn’t want the world to be democratic as they would disagree with us.

Jacques echoed this theme, arguing that for the last 200 years the developed nations had ruled the world allowing countries with 15% of the population to dominate the rest. Economic growth in the developing world will lead to greater democracy but it won’t be our kind of democracy.

At the end of the debate, democracy won. Only 3% of the audience didn’t know their view on the motion by the end; 39% were for the motion and 58% against. This house didn’t agree that ‘democracy is not always the best form of government’.

And so, in light of Tony Benn’s tragic death in March, we will leave the final words to him: “If one meets a powerful person – Adolf Hitler, Joe Stalin or Bill Gates – ask them five questions: ‘What power have you got? Where did you get it from? In whose interests do you exercise it? To whom are you accountable? And how can we get rid of you?’ If you cannot get rid of the people who govern you, you do not live in a democratic system.”