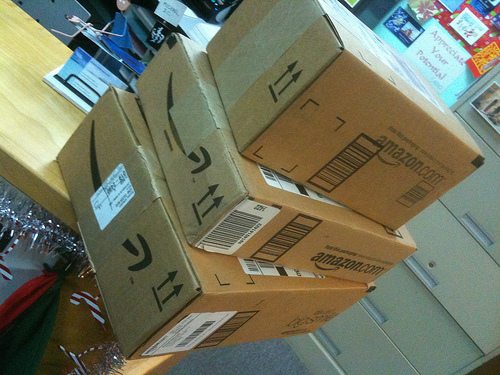 An online petition asking Amazon’s boss to pay living wages to the staff working in the company’s UK warehouses has already collected more than 40,000 signatures.

The petition launched on Change.org is named Amazon UK: all we want for Christmas is a fair wage and addresses Amazon’s boss Jeff Bezos, calling for fairer wages and better working conditions.

“Amazon has taken on nearly 15,000 extra agency staff to deal with the Christmas shopping rush. But many of them won’t earn enough to buy the bare essentials of life”, says the petition.

It also claims that the e-commerce giant is demeaning its workers in other ways, by making them staying for as long as 10 hours in the workplace, with timed toilet breaks and minimum wages, despite overall revenues of £37 billion and UK revenues of £4.2 billion in 2012.

Emily Kenway from responsible investment charity ShareAction, who launched the petition, told the Guardian, “It is a company that has really permeated all of our lives – and a lot of my friends and family are buying their Christmas presents from there – but Amazon aren’t paying the people who are packing them enough to live off”.

Kenway added that last year’s tax avoidance scandal has not discouraged people from buying from Amazon, despite a recent campaign which called on consumers’ to boycott the company this Christmas, an initiative that was also backed by some MPs.

Amazon states on its website that staff working in its fulfilment centres receives a median wage of £7.05, which can increase after 24 months, plus stock grants that add a 12% to the basic pay. Amazon also states that seasonal workers – like those employed over Christmas time – earn almost 90% of Amazon permanent employees’ starting wages.