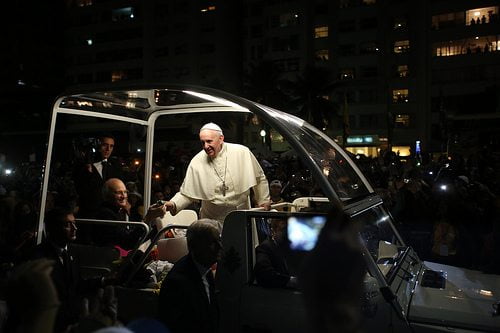 The archbishop of Canterbury Justin Welby has said that Pope Francis, who was elected in March, is his person of the year, describing him as an “extraordinary man”.

In an interview with the BBC, Welby said the pope had been “hugely effective” since beginning his papacy nine months ago.

“I would certainly put him as my person of the year. Well, I’d probably have several, but if you want one, I’d put him there. He’s extraordinary”, the archbishop said.

His comments come just a month after Pope Francis was named person of the year by Time magazine, which said he has pulled the papacy “out of the palace and into the streets”.

The two leaders have a healthy relationship according to some, despite their differences on some controversial issues. But both have spoken out against inconsistencies in the modern world’s economic structure.

The pope recently used his first lengthy bit of writing, the Apolistic Exhortation to condemn “trickle-down” economic policies, which he said allow the “powerful [to] feed upon the powerless”.

He also said that anyone who defended this theory within a free market economy “expresses a crude and naive trust in the goodness of those wielding economic power”.

Meanwhile, Welby has used his position as the leader of the Church of England to attack inconsistencies in the UK banking sector. Speaking on the BBC Today programme last week, he said, “One of the great challenges for the coming year, especially if the economy is going better, is for our financial system.

“Will it revert to the bad old ways of the past or continue the efforts for cultural change towards something that serves the common good?”

Archbishop of Canterbury: banking industry ‘in denial’ over finance crisis