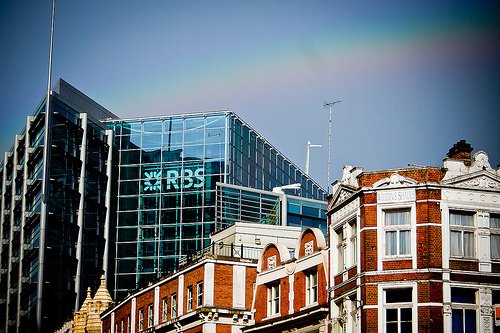 The Royal Bank of Scotland (RBS) will pay penalties totalling over £390m to three regulators for its role in fixing the Libor rate, it was revealed today.

The bank becomes the third institution to be forced to pay fines over the scandal, after Barclays and UBS shelled out £276m and £940m respectively last year. RBS will pay £87.5m to the Financial Services Authority (FSA), while the remaining sum will go towards two US regulators: the Commodity Futures Trading Commission (£207m) and the Department of Justice (£96m).

It’s expected that all three fines will be paid using money from the bank’s investment banking bonus pool. The FSA fine will be paid directly to the Treasury, which already has an 81% stake in RBS after bailing it out in the wake of the financial crisis.

Confirmation of its fine has been welcomed by campaigners.

“RBS needs to clean up its act and start working for the taxpayer instead of manipulating the financial system for the benefit of overpaid executives”, said Paul Daly, corporate accountability campaigner at Friends of the Earth Scotland.

“It’s right that the fine will be paid from bankers’ bonuses and not the taxpayers’ pot. The Libor scandal marks a real low point for RBS and should serve as a turning point for the bank to start acting as a responsible lender in terms of the economy and the environment.

“As a taxpayer-owned bank, RBS is perfectly placed to play a leading role in moving away from predatory, aggressive banking and towards a system that supports local businesses and economies, and help lead the charge to a low-carbon future.”

Some 21 RBS employees are accused of rigging Libor – the rate at which London banks borrow from each other. Fourteen of the staff members involved are no longer with the bank, while the remaining seven are either currently being reprimanded or occupy positions at RBS that don’t warrant disciplinary action.

It remains to be seen whether the main instigators of the wrongdoing will be prosecuted under available statute.

It was revealed earlier this week that the head of RBS’ investment banking arm John Hourican would be stepping down from his role because of the impact the Libor scandal has had. Media reports claim Hourican would be leaving without a pay-off.

RBS showed signs that it was moving onto a more sustainable track last week when it revealed that it could channel some £400m into renewable energy projects in 2013 – a figure slightly higher than its total Libor fine.