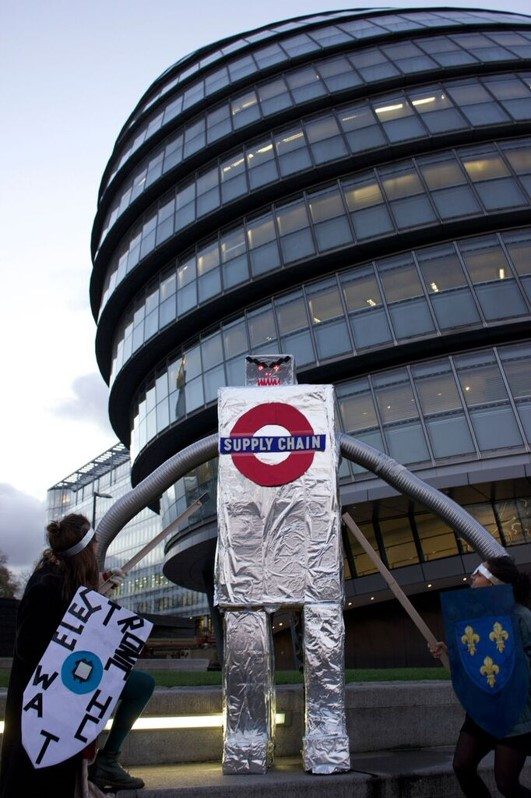 University students from across London brought a ‘robot’ to City Hall this morning, calling on Transport for London to improve conditions for workers in their ICT supply chain.

The campaigners claim that conditions for workers in the global industry are dire; with a recent report showing students in China are being forced to work in factories producing ICT for the public sector in the UK. Some of the brands mentioned in the report are among the biggest suppliers for Transport for London and the UK public sector generally.

Questions asked in October at the London Assembly by Green Party London Assembly Member Darren Johnson called on Transport for London to use the estimated £300m they spend on ICT and other electronics responsibly. The students are calling on TfL to use those contracts to insist on better standards for workers.

Transport for London are currently deliberating whether to join Electronics Watch and will make their decision this week.

Dela Anderson, Student from Kings College London said:“I find it worrying that public bodies are buying so much of their IT and electronics from abusive factories.  Like millions of other people I use Transport for London services every day and I’m concerned that the huge amount of income I put into Transport for London could be funding sweatshop conditions elsewhere. Transport for London can, and should, do something about it by joining Electronics Watch.”

Dominic O’Hagan from People & Planet said: Workers are treated like robots in this industry. Students, charities and unions across the country are calling on the public sector to use its huge purchasing power to address the labour rights abuses in their supply chains. Transport for London are a leading voice on responsible procurement in the UK. We’re calling on them to make the right decision; join Electronics Watch and become a part of the solution.