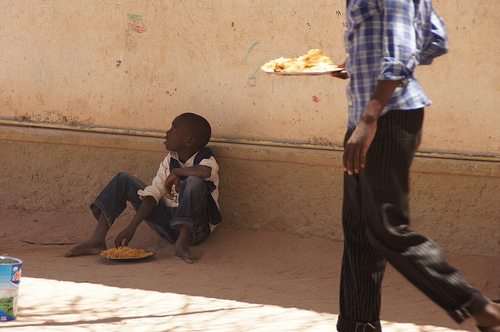 A quarter of the money that poor countries lose because of tax dodging multinational companies would be enough to eradicate global hunger by 2025, according to Enough food for Everyone IF campaigners.

Spokesperson Melanie Ward said, “Tax dodging is immoral and indefensible wherever it takes place, but in the poorest states in the world it has a particularly high human cost. To allow billions to be drained out of poor countries and into tax havens, while millions of people still go hungry is scandalous.”

“The pervasive corporate secrecy supplied by tax havens is at the root of the problem”, said Ward.

According to the IF campaign, which organised an anti-hunger rally in London last week to spread its message, a crackdown on tax dodging would significantly help fight hunger and malnutrition, which affect  870 million people worldwide.

Ward added worried that a G8 members deal might leave poor countries behind: “The time for change is right now

“David Cameron has a once in a lifetime opportunity to help secure an end to tax dodging in poor countries in the coming days as he hosts the world’s richest club: the G8.

“But as things stand, we are in grave danger of a G8 deal which leaves poor countries out in the cold, and which fails to demolish the walls of secrecy provided by tax havens and phantom firms.”

“The prime minister must act urgently to deliver a deal that works for the world’s poorest countries as well as its richest.”