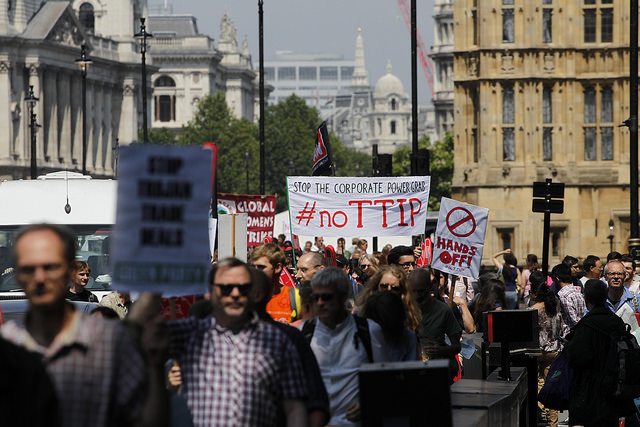 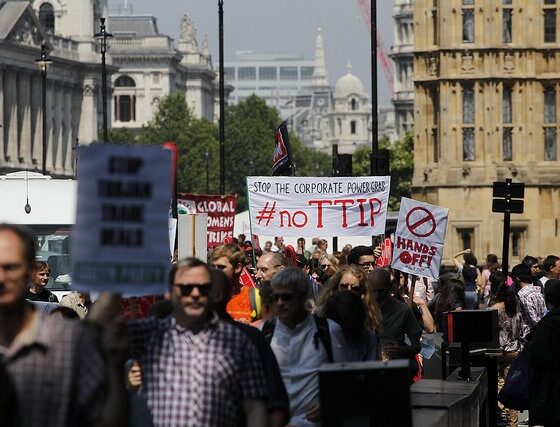 Opposition to the proposed Transatlantic Trade and Investment Partnership (TTIP) between the EU and US has significantly increased, while nationwide protests are organised against the dealings in Brussels.

The trade partnership has already come under heavy criticism from campaigners, who believe the move will undermine democratic procedures, consumer rights and civil liberties.

The agreement, which is still under negotiation, is intended to make trading and investment between the EU and US more accessible, by reducing consumer protection legislation and quality control regulations.

The deal will also open up the public sector to increased private investment, specifically the NHS in the UK.

Some 150,000 people have already responded negatively against one highly controversial aspect of the deal, known as the ‘Investor State Dispute Settlement’ mechanism. This would give businesses and corporations the right to sue governments over legislation that affects profit margins. The European Commission has never received such a large response from the general public.

Protestors have also recently been forcibly evicted from negotiations attended by chief EU and US representatives, as they demanded the talks were made public. The deals are currently being held in secret, where MEP’s and the public cannot scrutinise them.

Further action, organised by trade unions and campaign groups, is set to take place Europe-wide in October against the deal.

A ‘Citizen’s Initiative’ petition has also been launched with the aim of gaining one million signatures against the deal, and is to be delivered to the European Commission.

Campaign groups like The World Development Movement (WDM) and trade unions, including Unite, have called for the NHS to be taken out of the TTIP agreement, alongside other public services.

Head of campaigns and policy for WDM, Polly Jones, in a statement, said, “The coalition against TTIP is growing by the week.

“Citizens in both Europe and the US understand how serious a threat this agreement is to our democracy. We are now planning an autumn of activism on TTIP, and we believe we can beat it.”

Jones added, “The prediction that we could be £2 a week richer by 2027 is questionable. Even if it were true, it would be small compensation for a deal that threatens jobs, puts public services at risk from privatisation, and is likely to weaken food and environmental standards.

“The TTIP deal is a threat to our democracy and our society, and it should be abandoned.”