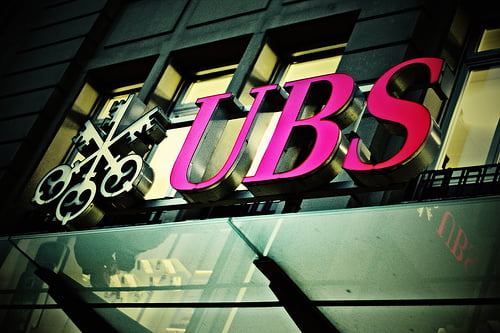 Boardroom officials at Swiss bank UBS have expressed their regret over the “inappropriate and unethical behaviour” that led to the firm being fined $1.5 billion (£940m) for its role in the Libor rate-fixing scandal.

The bank today became the second high street institution to be slapped down by regulators over Libor, which saw bankers and brokers deliberately fix the rate at which banks borrow from each other.

Barclays was ordered to pay $450m (£276m) in the summer, and it is expected that the Royal Bank of Scotland will soon follow suit.

The UBS penalty includes a $1.2 billion (£740m) sum to the US Department of Justice and the Commodities Futures Trading Commission, along with a £160m fine from the UK’s Financial Services Authority and a 59m Swiss Franc (£40m) charge to the Swiss Financial Market Supervisory Authority.

However unlike the ruling on Barclays’ role in the fixing of Libor, regulators deemed that UBS traders had directly profited from altering the bank-to-bank borrowing rate.

“The findings we have set out in our notice today do not make for pretty reading”, said Tracey McDermott, director of enforcement and financial crime at the FSA, whose fine to UBS is the largest it has ever handed out – and would have been 20% higher had the bank not got a discount for its prompt settlement.

McDermott added, “The integrity of benchmarks such as Libor and Euribor [the European equivalent] are of fundamental importance to both UK and international financial markets. UBS traders and managers ignored this. They manipulated UBS’s submissions in order to benefit their own positions and to protect UBS’s reputation, showing a total disregard for the millions of market participants around the world who were also affected by Libor and Euribor.”

UBS CEO, Sergio Ermotti, said the behaviour of many of the bank’s employees had been “unacceptable” and their misconduct “does not reflect the values of UBS”.

“We deeply regret this inappropriate and unethical behaviour”, Ermotti went on to say in a statement.

“No amount of profit is more important than the reputation of this firm, and we are committed to doing business with integrity.”

The total UBS fine is the second largest in banking history, and is dwarfed only by the $1.9 billion (£1.2 billion) penalty handed out to HSBC last week for the role it played in laundering money for Mexican drug barons and Iranian criminals.

And it’s not the first time the Swiss firm has had a significant financial outlay forced upon it for unethical behaviour: in May 2004, it was charged $100m by the US Federal Reserve for illegally transferring money to Cuba and other countries that were under a trade embargo.

If you are tired of the culture, ethics and malpractices of the major banking groups, read our Guide to Sustainable Banking to explore the alternatives.