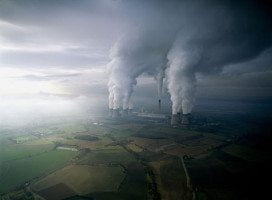 “Be in no doubt; this is very big news. The coal industry around the world has been under sustained pressure for a number of years now due to a range of factors, including a glut of coal pushing prices down and the increased availability of natural gas,” he said.

“But environmental pressures are the biggest factor. In many countries, air pollution is now a major concern, governments are becoming more and more concerned about the climate impacts of coal; and now the biggest private company of all has succumbed.

“Phasing out coal in favour of cleaner forms of energy, like natural gas or renewables, is a process which is accelerating around the world. US companies are going bankrupt, European countries including the UK are phasing it out, and our research also shows that talk of a coal renaissance in Asian countries is likely to be a red herring.”

“This is a company that wilfully and deliberately sought to delay, dismantle or destruct climate action. Perhaps if they had spent more time and money diversifying their business rather than on lobbying against climate action and sowing the seeds of doubt about the science, they might not have joined the long (and ever growing) list of bankrupt global coal companies.”
Ilmi Granoff, Attorney and Senior Researcher at the Overseas Development Institute (ODI) said:

“We know their playbook. As coal majors like Peabody lose out to cleaner technologies in their home markets, they pitch their industry as the solution to poverty.  But increasingly developing economies – from Ethiopia to China – aren’t buying the pitch. Cleaner technologies are delivering better on everything from household energy access to national energy security.”Dr. Alison Doig, Principal Climate Change Advisor, Christian Aid said:

“We are starting to see the dawn of a new clean industrial era, in which coal power belongs in the past. It is time to make a big shift towards a renewable world which delivers sustainable energy for all, providing power for the world’s poorest without increasing the risks of climate change.”Mary Anne Hitt, director of Sierra Club’s Beyong Coal Campaign, said:

“The biggest coal giant has fallen, and Peabody Energy’s bankruptcy should serve as a wake-up call to anyone promising that coal’s glory days will return. As Peabody grapples with the reality that the world is turning away from coal, it’s essential that it doesn’t turn away from its obligations to workers, communities, and the environment.

“Unfortunately, Peabody has a history of spinning off its responsibilities into smaller companies that seem built to fail, while taxpayers are left holding the bag. We need to make sure the former energy giant is held accountable for every promise it’s made and that its decline leaves its commitments in the best shape possible. In addition to Peabody doing its part, we also need Congress to do theirs — which means investing more federal dollars in economic redevelopment and diversification in coal communities, shore up health care and pension plans for coal workers and their families, and ensure toxic mining sites are cleaned up and reclaimed.

“As we transition to the clean energy economy, it’s essential that we don’t forget the immense contributions that coal communities have made to America and that we secure every family’s livelihood as we transition to new economic opportunities.”

IEEFA: Peabody Failure a Stark Example of an Industry in Need of a More Honest Business Plan

“Company Will Emerge With ‘Smaller Markets and Fewer Mines;’ Restructuring Cannot Allow for Taxpayers to Be Left on the Hook for Vast Cleanup Costs in the U.S. and Australia

(IEEFA) – Today’s announcement that the largest private-sector coal company in the world is seeking Chapter 11 bankruptcy protection serves as a stark signal to investors that there is little upside to a business hobbled by excess financial leverage plus the ongoing structural decline of the global coal industry, IEEFA analysts said.

“Peabody Energy, to the detriment of its investors and employs, is bankrupt today because its leadership has been unable to adjust to new energy markets in which coal is being displaced by new energy sources,” said Tom Sanzillo, IEEFA’s director of finance. “That said, the coal industry is not dead, but it faces a time now in which is must innovate in ways that it has not done before. That means smaller markets and fewer mines.”

Tim Buckley, IEEFA’s director of Energy Finance Studies, Australia, joined Sanzillo in noting that Peabody—like many coal companies—expanded rapidly in the years leading up to a coal market crash that has seen many coal companies lose more than 90 percent of their value since 2011.

“Peabody’s bankruptcy stems directly from the company’s top-of-the-cycle, multibillion-dollar debt-funded acquisitions, its inability to properly gauge energy markets and its failure to see the coming over-supply in the seaborne coal trade,” Buckley said. He noted in particular Peabody’s leveraged acquisition Macarthur Coal Ltd (Australia), in 2011, for a top of the cycle A$4.9 billion.

Sanzillo said Peabody’s bankruptcy marks the end of an era that can be traced to the 1990s, when coal companies began to rely more on public equity markets rather than private energy and mineral interests: “Now that they have burned through energy industry deep pockets, multi-decade long government subsidy programs and public equity markets they must find others sources of capital. New investors will demand a level of innovation and discipline that has so far been lacking.”

Sanzillo cited one company number in particular: “Peabody in 2013 reporting 9.285 billion tons of coal in its reserves, and in 2015 reducing that to 6.3 billion tons. Most of that change comes from write-offs of reserves that are no longer minable by current market economics.”

Buckley and Sanzillo noted that Peabody’s bankruptcy puts taxpayers in both Australia and the U.S. at risk from “self-bonding” allowances and underfunded rehabilitation bonds in which the company promised to pay for billions of dollars in cleanup costs and that Peabody will probably now try to dodge.

Peabody’s restructuring, they said, should include ample set-asides for those costs.”