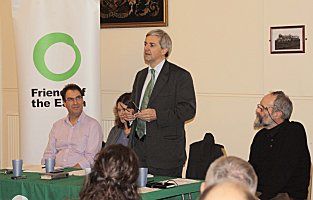 A ground-breaking pledge to invest one third of Haringey Council’s equity funds into a Low Carbon Fund was agreed by the council’s Pensions Committee last week. The innovative approach will mean that the council will have no investments in coal industries anywhere in the world, and also comes with an agreement to explore making specific investment in the low carbon economy, such as renewable energy.

The agreement followed lobbying by members of Friends of the Earth, Muswell Hill Sustainability Group and others. A petition on the subject has also now reached more than 2,500 names and will be presented to a future Full Council meeting, when local campaigners will be asking Haringey Council to move more of its funds into Low Carbon equities in the near future.

Speaking to the meeting, Friends of the Earth representative Quentin Given said:

“You have a duty of care to pension fund members. That includes preserving a decent world for them to live in. To stay within 2 degrees of warming we have to leave 80% of the coal and oil we already know about in the ground, unburnt. But there are financial reasons to do this too – we are already seeing the value of coal companies dropping as the world moves towards renewable energy.”

“When we are seeking to become London’s first zero-carbon borough, it doesn’t make sense for us to continue to invest in fossil fuels when we want to reduce, and indeed end, demand for them. The interest in this issue from local campaigners shows how passionately people in Haringey feel about the environment, and we share that passion.

“I’m proud that the council’s pensions committee has agreed not only to move some funds into a low carbon fund but to also consider investing in low carbon industry, giving us the opportunity to tackle carbon emissions while still getting the best return on our pensions fund.”

In the UK, Haringey Council joins the Environment Agency and South Yorkshire pension funds in making divestment commitments. They also join institutions globally worth over $3.4 trillion who have committed to divest assets from fossil fuels.

The full press release can also be found at: http://gofossilfree.org/uk/press-release/haringey-council-divests-from-coal-and-moves-200-million-into-low-carbon-fund/