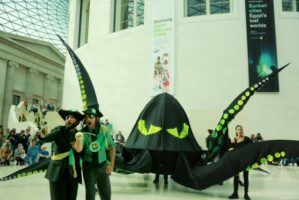 BP or not BP? A theatrical protest group orchestrated more than 200 people in an unauthorised group performance inside the British Museum’s Great Court at 2.30pm on Sunday 25th September.

The performance was publicly announced in advance, but the group succeeded in pulling off the ocean-themed flashmob, or ‘splashmob’, inside the building despite not having permission from the museum. Performers smuggled costumes, props and all the necessary pieces of the giant ‘BP kraken’ past the museum’s security checks, with only one tentacle being discovered and confiscated. The kraken – operated by a team of puppeteers – appeared in the middle of the performance, to the surprise of most of the crowd, to assist the BP pirates in their battle against the merfolk. The gigantic beast chased the splashmob through the Great Court but was finally defeated in a musical finale.

BP or not BP? have now performed without permission 20 times in the British Museum over the past four years – including yesterday, when they joined with Letty Hidalgo, a Mexican mother whose son was forcibly disappeared, and other action groups including London Mexico Solidarity, to call for justice for Mexico’s disappeared and demand an end to BP’s plans to drill in Mexico.

Today was BP or not BP?’s most ambitious piece of creative protest to date, and was carried out in response to the museum’s decision, in late July, to renew its sponsorship deal with BP for another five years. The group are demanding that the unpopular new deal – set to start in 2018 – must be dropped, and say they will continue to escalate protests until it is.

Tilly Hearn, who played a mermaid in the performance, said:

Today we revealed the monstrous nature of the British Museum’s sponsor, BP.

“We still can’t believe that the British Museum has put the logo of this climate-wrecking company on its Sunken Cities exhibition.

“By lobbying against climate laws, blocking clean energy and pushing to drill for ever-dirtier sources of oil, BP is doing more than almost anyone to push us into climate disaster and create the sunken cities of the future.

“The British Museum says it’s going to keep promoting BP’s brand, with a new sponsorship deal until 2022 – but the public opposition on display today shows that this is simply wishful thinking.”