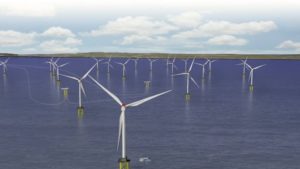 Moray Firth Windfarm Gets Go Ahead

The Beatrice Offshore Windfarm Ltd (BOWL) came to a financial close yesterday. The 84 turbine project, which is situated in the Outer Moray Firth, will be one of the largest private investments ever made in Scottish infrastructure. Offshore construction is expected to start next year and once completed the windfarm should generate enough energy to power approximately 450,000 homes- around three times the number of homes in the Moray and Highland regions.

Lang Banks, Director at WWF Scotland, said: “Proceeding with the Beatrice offshore wind farm is great news for the climate and Scotland’s economy. This single project will almost quadruple our offshore wind capacity, helping to reduce our greenhouse gas emissions as well as creating jobs and supporting local economic renewal.

“Scotland’s waters boast 25 per cent of Europe’s offshore wind resource and it is vital that we continue to tap into this invaluable resource in the future.

“Independent research shows that we could have a secure electricity system powered almost entirely by renewables by 2030. To ensure that we reap the benefits of becoming the EU’s first fully renewable electricity nation, the Scottish Government’s forthcoming energy strategy should commit to this goal and major on flexibility, demand reduction, and storage.”

Lindsay Roberts, Senior Policy Manager at Scottish Renewables, said: “Beatrice is the first commercial offshore wind farm to reach this stage of development in Scottish waters. It’s fantastic that the partners in the project will now be moving ahead with construction.

“Scotland has 25 per cent of Europe’s offshore wind resource, and projects like Beatrice are enabling us to capitalise on that in both environmental and economic terms.”