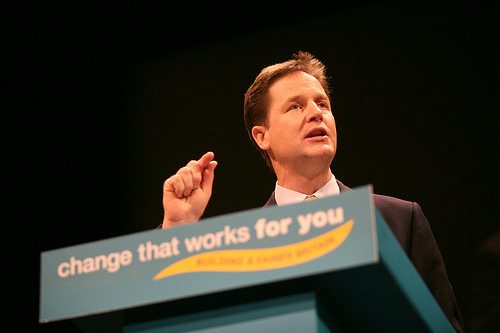 Deputy Prime Minister Nick Clegg has said he disagrees with David Cameron’s proposals to “roll back” green levies on energy bills, suggesting that they should be moved into general taxation instead.

Speaking during Prime Minister’s Questions on Wednesday, Cameron announced a review into green energy taxes. He said he wants to cut environmental regulations in order to reduce household bills.

Speaking on BBC Radio 4’s Today programme, Clegg said, “It’s not something that I fully agree with.”

The Liberal Democrat leader did say however that he and Cameron will “stress-test” the levies.

“If we can deliver those objectives of keeping the lights on, insulating people’s homes helping the fuel-poor, supporting the green economy for less, of course I don’t want to see an extra penny go on people’s bills that is absolutely necessary.”

However, he stressed that the funding is essential for “looking after the environment, securing thousands of jobs in the renewable green sector, and […] giving deductions on people’s fuel bills for two million of the poorest households in our country.”

Clegg also echoed the beliefs of 75% of the Britons – according to a recent poll – saying that green levies were not the main cause of higher bills.

“In fact, 60% of the increase in energy bills since 2010 have come from wholesale prices,” he added.

On Wednesday, Sir Robert Smith, chair of the energy and climate change select committee of MPs, announced that the group are to quiz energy company bosses over increasing energy bills.

British Gas, SSE and Npower have each announced average winter energy bill rises of 9.2%, 8.2% and 10.4% respectively. The rest of the ‘big six’ energy providers are expected to follow suit.