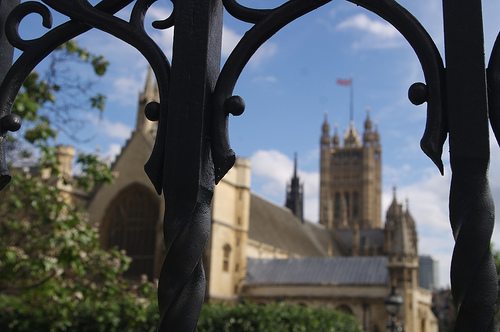 The Queen delivered her final parliamentary address before the 2015 general election on Wednesday, outlining some of the coalition’s plans for its final year in office.

Read the full story, and see below for all the latest reaction from businesseses, investors and campaigners.

“There is relatively little environmental content in the last Queen’s speech from the government that set out to be the ‘greenest ever’. However, we welcome the statement that ministers will champion efforts to secure a global agreement on climate change. They need to do so, as climate change is one of the greatest threats to both people and nature, and the time for action is now.

“The government could send a strong and positive signal about its intentions in this area by announcing that it accepts the recommendations of the Committee on Climate Change on the fourth carbon budget. Doing so would underline its international leadership credentials, and be a huge boost to a low carbon sector that already employs almost a million people in the UK.

“The remaining months of this parliament are also the opportunity for the government – and the opposition parties – to set out their stall for the years ahead. We’d like to hear ministers, from the prime minister down, giving their vision for climate change leadership, environmental restoration and the development of the green economy if they’re back in government after the general election.”

“The coalition will laud their green credentials by claiming to have delivered on the promise for all new homes to be zero-carbon from 2016. This has undoubtedly been hard-won by the Lib Dems, but unfortunately they are at risk of snatching defeat from the jaws of victory by letting small developments – a large chunk of the housebuilding market – off the hook. Zero-carbon homes save a fortune for households in energy costs and are better for the environment.

“However, the policy of allowing developers to pay into a fund to offset emissions they cannot reduce is a sound idea in principle, despite its lukewarm reception this week. If implemented properly, this could lead to investment in local, community energy schemes and drive innovation in clean technology. On the other hand, a weak scheme, that generates little investment that has no connection to the housebuilding which is taking place, would be a deeply disappointing outcome.”

“Too often, our economic rules and regulations make doing the socially responsible thing harder rather than easier. Giving people greater freedom and flexibility on their pensions should include giving them the option to invest socially. The upcoming pensions bill presents an excellent opportunity to do this.”

“The infrastructure bill represents a high-risk strategy from government which badly misreads the public mood. A bill combining road-building and fracking will attract serious and sustained criticism from a wide range of quarters in the run up to the next election.

“Proposing further planning reform to speed up major projects has become a default position for successive governments. It may seem attractive, but examinations already proceed at a breakneck pace which risks poor decisions and more cases ending up in the courts. There must be proper time to examine important issues like air pollution and the effects on local communities.”

Andrew Pendleton, head of campaigns at Friends of the Earth

“This is the latest salvo in yet another coalition assault on our environment.

“Allowing fracking firms to drill under people’s homes without permission, and scrapping plans to make new houses more energy efficient would show a complete disregard for tackling climate change and protecting the planet.

“A plastic bag charge is simply a fig leaf to try and hide the government’s increasingly exposed and withered green credentials.”

“At a time when savers can build a nest-egg while also making the world a better place for their retirement, they must now be given the opportunity to make that choice. There are a number of steps the UK can take to empower its citizens to make socially responsible decisions when they manage their money. This is an important one.”

“Something’s gone seriously wrong with the zero-carbon homes agenda if such little effort is being made to incorporate proven technologies into new homes. Solar power and solar heating are particularly affordable in new build so it would make little sense to sideline these technologies and instead effectively tax house builders and new home buyers in order to develop carbon reduction schemes elsewhere in the UK.

“The technologies that can eliminate both carbon emissions and energy bill anxiety in homes are available right now. If you’re going to pay a modest premium for a new home, you should be able to recover that cost quickly through very low energy bills – that is what solar technologies enable. Instead, in their efforts to ensure business as usual for developers, the Department for Communities and Local Government is proposing a very convoluted interpretation that is little more than a carbon-offsetting scheme delivering little benefit to home buyers.”

“The government is making a mockery of public participation by announcing legislation in the Queen’s speech to ‘open up access to shale gas’. Just days ago ministers launched a public consultation on whether or not to strip away householders’ rights to say no to companies fracking under their homes.

“Ministers are losing the argument on fracking and are now steamrolling over people’s rights in order to sacrifice our countryside and climate. This is all for the sake of an industry which will have a marginal impact on providing energy security. When ministers sober up from their shale gas inebriation, we’ll all be sharing their morning hangover.”

“The UK needs houses, but policy should benefit the people who will buy and live in them as well as the people that build them. Energy efficiency and renewable energy means seriously low energy bills – possibly under £300 – from day one. A strong emphasis on Allowable Solutions will see homeowners incur the costs of this new tax rather than the benefits of efficient homes with on-site renewables and greatly reduced energy bills.

“We are working hard on developing an industry-led protocol to increase joint ownership of renewables projects with community groups. This is an important step for securing sustained public support for renewables. Community engagement with renewable electricity also raises awareness of energy and environmental issues and can lead groups to engage in other positive environmental schemes, from renewable heating networks and low carbon transport initiatives to energy efficiency and recycling programmes.”