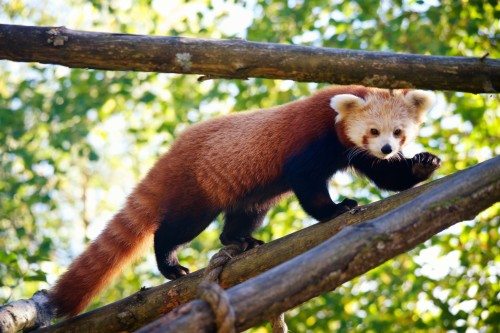 Conservation charity, the Royal Zoological Society of Scotland (RZSS), has been awarded an additional £25,000 from players of People’s Postcode Lottery. The surprise funding will support the development of an enclosure for two red pandas that are confirmed to arrive at RZSS Edinburgh Zoo later this year.

Players of People’s Postcode Lottery have awarded an extra £1.425 million to long-term supported charities and RZSS is one of 57 charities that will receive the extra £25,000 award from players of the charity lottery. Last month RZSS celebrated receiving half a million pounds since the beginning of 2014, which has helped support vital conservation and research projects such as the Budongo Conservation Field Station in Uganda and the Giant Armadillo Conservation Project in the Pantanal, Brazil.

Barbara Smith, Managing Director for the Royal Zoological Society of Scotland, said: “As a conservation charity we are delighted and grateful to be receiving this additional sum from players of People’s Postcode Lottery. Two male red pandas are due to arrive later this year at RZSS Edinburgh Zoo and this surprise funding will make a huge contribution towards the creation of an enclosure for them.”

Darren McGarry, Head of Living Collections at RZSS Edinburgh Zoo, added: “We’re delighted to be bringing red pandas back to Edinburgh. Our sister park RZSS Highland Wildlife Park houses red pandas and has had great success in breeding this endangered species, with a male kit born for the first time in over a decade in 2013 and a male and a female in 2014. In the future we hope to replicate this success at RZSS Edinburgh Zoo. To start with we will support the captive breeding programme as a male holder, but in the future we will house a breeding pair. We’re sure our red pandas will be extremely popular and they were a natural choice as we already have a plentiful supply of bamboo!”

This additional funding comes at a very exciting time for the charity lottery as they mark 10 years since the first ever draw. The last 10 years have created thousands of lucky winners but also have provided vital funding for numerous charities across Great Britain and internationally. A minimum of 27.5% is awarded to charities and good causes with over £99.6 million awarded to date.

RZSS Highland Wildlife Park’s breeding pair of red pandas has lived there since 2012, although the species has been at the Park since 2008, and resident female Kitty has given birth and reared three kits. Red pandas are listed as Endangered on the IUCN Red List and are native to the eastern Himalayas and south central China. Despite what their name suggests, red pandas are not related to giant pandas, but are distantly related to the raccoon family.

Red pandas, also known as the lesser panda, have features similar to giant pandas, markings similar to a raccoon and are slightly larger than domestic cats. They have reddish-brown fur with a bushy ringed tails and small ears, and their fur helps to keep them camouflaged in their natural habitat. Red pandas share some of their habitat with the giant panda and also like to eat bamboo; however, red pandas will supplement their diets with fruits, nuts, eggs, flowers and seeds. Their average lifespan is eight to 12 years with some red pandas living up to 15 years. Red pandas are generally quiet, but when close by, squeaking and chattering sounds, which sound similar to a chipmunk, can be heard. Red panda females normally give birth to one to four kits in mid-June to late July. They are listed as Endangered due to habitat loss and poaching and it is estimated that there are fewer than 2,400 red pandas left in the wild.