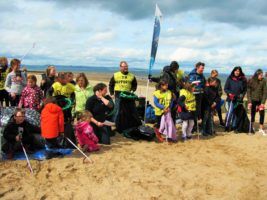 The Marine Conservation Society (MCS) has collaborated with Children’s University Scotland (CUS) and the Royal Zoological Society of Scotland (RZSS) to encourage local school children and their families in a beach clean at Edinburgh’s Portobello Beach.

The event forms part of the MCS’s Great British Beach Clean weekend, the UK’s biggest beach clean and survey, involving hundreds of beaches across the UK over the weekend 16-19th Sept.

Children from CUS schools across East and Midlothian, and from Edinburgh’s first CUS school St Mary’s RC Primary, will be involved in the event. CUS is a national charity that seeks to inspire children to get involved learning activities outside normal school hours in bid to build confidence and skills and encourage a love of learning.

Children’s University Scotland is all about recognising that learning can and does take place anywhere, not just inside the classroom.

“Events like this are so important in promoting family learning, helping to link the learning that takes place inside and outside school, and raising awareness amongst future generations about important environmental issues,” said Mary De la Peña, CEO of CUS.

Children will be provided with litter pickers, gloves and litter surveys as they hunt for rubbish left by beachgoers or washed up from sea, recording their findings and contributing useful data to the MCS’s national database.

The three national charities seek to raise awareness of the impact of litter pollution and the danger it poses to humans and wildlife. 2016’s Great British Beach Clean weekend comes as the negative environmental impact of plastic microbeads, one form of marine pollution, has been in the public eye due to a recent government ban.

“It’s fantastic to see so much passion for our beaches with such a diverse group of volunteers coming along to our Great British Beach Clean event at Portobello. If you would like to join in then please head to www.mcsuk.org to find an event near you this weekend!” says Catherine Gemmell, Scotland Conservation Officer at the MCS.

To help further the cause, MSP for Edinburgh East Ash Denham has committed herself and her office staff to help out. Meanwhile, players for the professional ice hockey team Edinburgh Capitals will also attend to provide an extra boost to the children taking part.

Matt Tipoff, player for the Edinburgh Capitals, said, “Edinburgh Capitals would like to thank Children’s University Scotland and MCS for the opportunity to take part in such a positive environmental initiative. Our goal this season is to be as engaged in our local community as possible; we hope to show the same level of commitment to the city of Edinburgh that we receive from our dedicated and loyal fan base.”

RZSS will be involved as part of their educational outreach project Wild about Scotland, which aims to educate the next generation of conservationists about the importance of conserving Scottish wildlife. The award-winning Wild about Scotland campaign has been made possible thanks to a partnership between RZSS and Clydesdale Bank. RZSS’s Wild about Scotland bus, which has been converted into a unique teaching space for school children, will park up beside the beach and offer drop-in sessions at the event.

Barbara Smith, Interim CEO of the Royal Zoological Society of Scotland, said: “We are delighted to have partnered up with Children’s University Scotland and the Marine Conservation Society, for the Great British Beach Clean. The Wild about Scotland campaign provides a unique way of engaging children with conservation and it is important for us to teach young people about the importance of conserving our native species and oceans.”