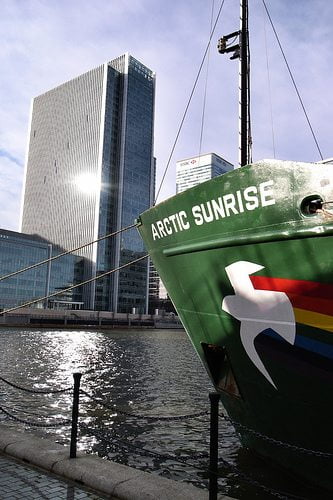 The Greenpeace activists who attempted to board a Russian oil rig are “obviously not pirates”, according to the country’s president Vladimir Putin. However, he insists they technically did try to take the rig over in an act that violated international law.

“Anything could have happened. An operator error or a technical malfunction. There was a danger to lives and people’s health. Are such publicity stunts really worth the possible serious consequences they may bring?” Putin asked at an international Arctic forum in Russia.

“It would have been better if Greenpeace members were in this hall and describing their attitude to the problems we are discussing, voicing their demands and wording their concerns. Nobody brushes them aside.”

He said, “Our climbers attempted to attach themselves to the side of the platform to raise attention to the threat of Arctic oil drilling in this fragile environment and the urgent need to deal with climate change. This was a peaceful protest against Gazprom’s ambitions to be the first company to pump oil from icy Arctic seas.”

On Tuesday, Russian prosecutors had accused the activists of piracy. Committee spokesman Vladimir Markin said, “All those who assaulted the platform, regardless of nationality, will be prosecuted.”

The ship was raided by armed men in balaclavas who abseiled down from helicopters, and were held at gunpoint.

The Russian authorities have released footage that allegedly shows security forces confronting two climbers during the protest last Wednesday. The video appears to show live rounds being fired into the water by the security forces, despite an activist on the Greenpeace boat clearly holding his hands in the air.

Greenpeace says that all 30 activists remain under arrest near Murmansk. Five people were interviewed last night by the Investigative Committee and served papers confirming they were are being investigated for piracy offences, but they have not yet been charged.